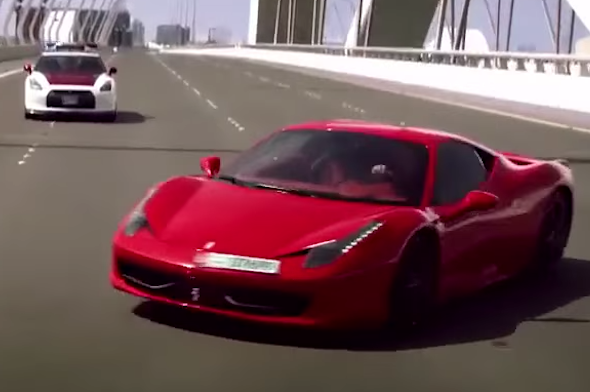 Think of police chases and what do you get?

In Britain, it may feature an old Cavalier being chased through an industrial estate, or a gang of ‘yoofs’ on BMX’s flying through a housing estate pursued by a diesel hatchback.

Or something to do with a swan.

In America, there’s usually something on fire…

Yet in Abu Dhabi, they like to do things a little differently. A little classier. A little more Hollywood.

To showcase the cars at their disposal, the Abu Dhabi Police Force decided to re-enact their own chase. First off we see the bad guy arrive in a Ferrari 458.

He’s followed by a driver in an E-Class Mercedes which, to be fair, looks more like an enraged taxi driver chasing after someone who’s run before paying their fare.

After getting out of the centre of the city, the 458 quickly outpaces plod.

Which is why they call in the big guns, in the form of a Nissan GTR.

The GTR catches up with the 458 quickly and thanks to the magic of film, guides the runaway stallion towards a rather meaty looking roadblock.

The video is definitely best viewed in full in all of its cinematic, over-the-top glory. Check it out below.