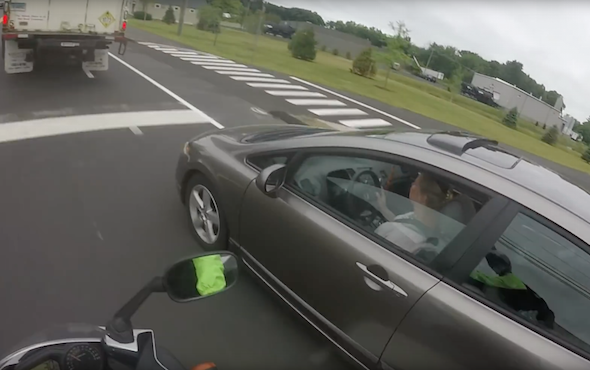 Revenge is a dish best served cold, they say.

No-one told this biker in South Windsor, Connecticut, though, who turned tattletale on an obnoxious motorist at the first sign of the cops.

To be fair, the driver was well in the wrong, trying to cut in front of the motorcyclist as her lane merged into his.

As he rides off, the biker turns around and notes her numberplate before alerting the police – just a little over the top?

Incredibly, in a very rare case of a bike-friendly cop, the police took the biker’s side and followed the driver, pulling her over and slapping her with two tickets – one for passing on the right and another for unsafe lane change.

However, we can’t help but wonder whether the whole drama could have been avoided if he’d just overtaken her in the first place.

We’ll leave you to make your own mind up… (NB: The video contains very sweary language.)