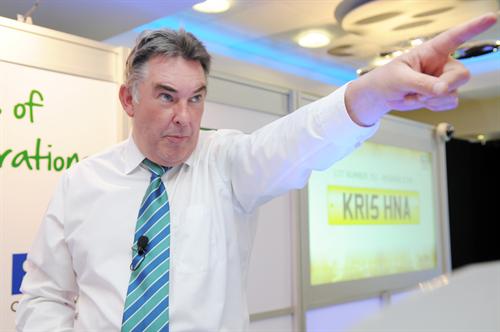 KR15 HNA. This mixture of letters and numbers make up the most expensive current-style number plate ever sold in Britain.

A London-based businesswoman has forked out a monstrous £233,360 for the personalised plate that we can only imagine will sit on the front of a very expensive car.

But we hope it’s really on a Fiat Punto.

As impressive as that sum is, it isn’t the most expensive ever, so hold on to your hats and prepare to feel poor as we take you through the eight plates that are more expensive than KR15 HNA…

1 Richard Hammond? No, sadly this number plate isn’t on one of Hamster’s classic Land Rovers. It was in fact bought by businessman Robert Harveson, whose business is obviously going pretty damn well.

Due to the popularity of the name in the UK, it is understandable that this plate, which reads ‘SINGH’, went for a lot of money. Whoever bought this must be the bee’s knees amongst the Sikh community.

Make sure that people are aware that you are a very important person by sticking this number plate on the front of your car. A bit showy for our taste buds but we doubt the owner cares very much – he’s absolutely minted.

“Son, what do you want for your birthday? I was thinking some action figures and a trip to the cinema, a nice cake…”

“No, I’d like the number plate M 1 please, it will look cool on my pedal tractor.”

And that is how Mike McCombe bought his 10-year-old son the personalised plate, kind of…

This number plate was made before the annoying pop group were formed, so the owner isn’t a member or a crazed fan. He is probably regretting it now as he gets mistaken for one of the foursome and screamed at by teenage girls far too often. Probably.

Thought to be the first number plate in Scotland, a patriotic Scotsman purchased it and apparently put it on an old Skoda (we have our doubts). No point in acting humble now, mate, you’ve spent more than 400k on a letter and a number on a bit of plastic.

The popular motor sport Formula One is what makes this number plate so sought after and expensive. It is sitting pretty on the Bugatti Veyron of businessman Afzal Khan, who is quite clearly not short of cash.

Taking top spot is this number plate, which has exceeded the half-a-million pound mark by a clear Ford Mondeo. Its home is on a Ferrari 250SWB that used to be owned by Eric Clapton and is worth around £10m. A worthy place for the most expensive three numbers in the UK.