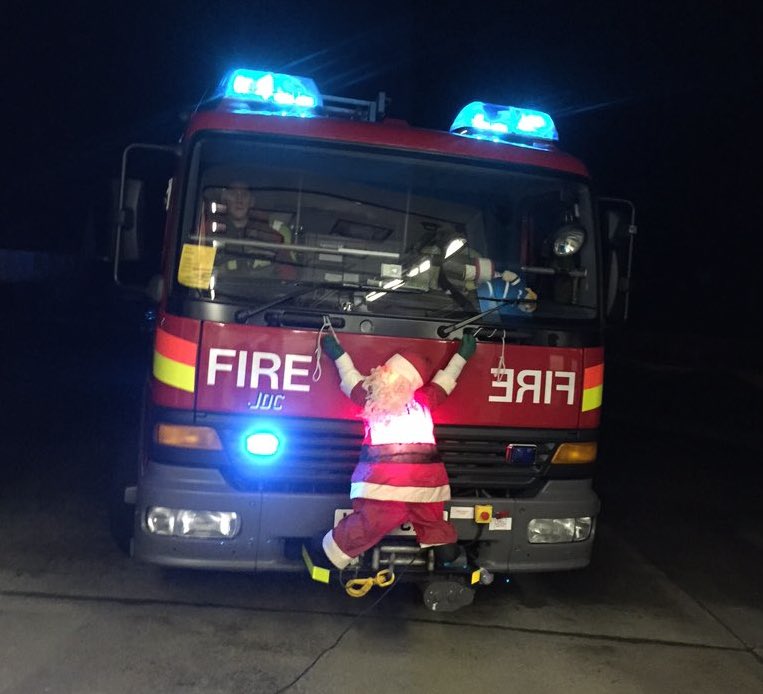 What’s this, what’s this? Santa flattened by a fire engine?

Thought we hit something on the way home… Sorry kids, Santa isn’t coming!

In fact, the Cornish fire crew had thought it’d be funny to spread upset among children at a time that’s supposed to be filled with joy and merriment for them.

The firefighters had attached a decorative Santa they had from last year to the grille of one of their engines. They didn’t actually get round to driving with it on, but as mother Sandra Jarvis said:

It might seem hilarious to the firemen but it could upset kids. If my two see it they’ll be in tears. They’ll think Santa has been run over and won’t be able to deliver their presents.

And the firefighters obviously thought better of it, too, subsequently putting out a two-tweet message that read:

Following our tweet of Santa on the fire engine we would like to reassure everyone that Santa is fine! We promise as long as you’ve been good he will visit you. The engine never left the station with Santa on the front. There is no chance any children will see it and be upset.

before sheepishly deleting the tweets.

We’re glad they saw sense, because we have nothing but admiration for the fantastic work that is otherwise done by the fire and rescue service, and the serious error of judgment in tweeting the picture in the first place really didn’t do the Saltash station any favours.