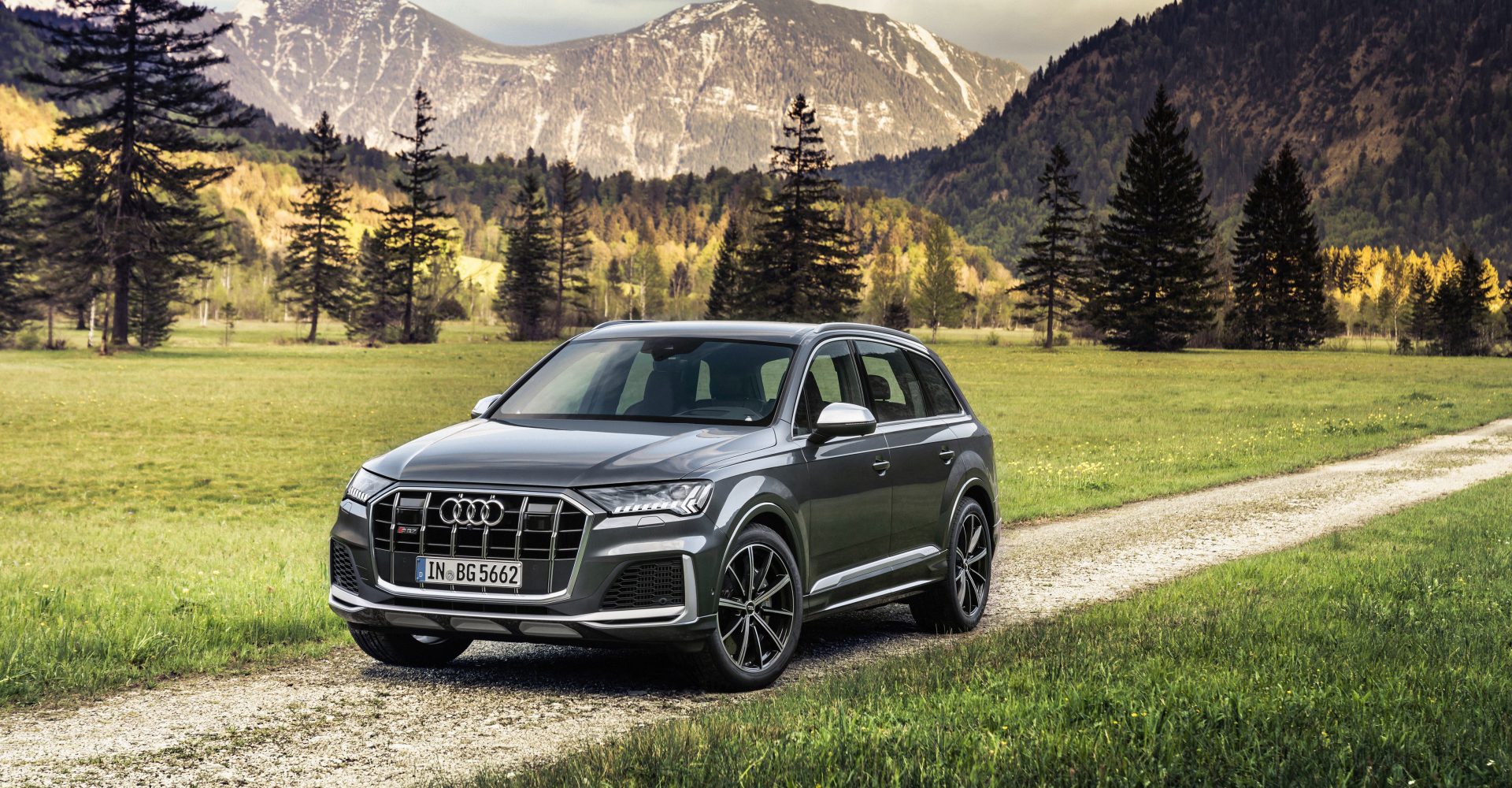 The market for a vehicle that can carry seven people while also having enough performance to give a supercar a run for its money away from the lights must be pretty small – yet it must be significant enough for Audi to continue offering the SQ7 in its line-up.

It now has a petrol engine, switching back after the German firm moved its S line-up to diesel. This is because Audi wanted to sell the SQ7 in America, and they hate diesel over there even more than Europeans.

We’ll go into detail about the engine in a moment as that’s the major news here, but elsewhere the SQ7 has been given all-wheel-steering as standard for the first time. This improves agility at lower speeds and stability at higher speeds.

It also has an eight-speed automatic transmission and permanent all-wheel-drive to get the power into the road, while S-specific air suspension helps to improve handling when required without having to sacrifice too much comfort.

So the engine has been swapped out, replacing the diesel V8 with a petrol V8. This one’s a 4.0-litre unit making 500bhp and 770Nm of torque, a substantial increase over the previous model’s 429bhp.

The 0-60mph time is 3.9 seconds, which is astonishing for a car of this size. It feels every bit as fast as the numbers suggest, too. Put your foot down hard and you feel the SQ7 squat as all four tyres grip up and catapult you forwards with hilarious efficiency, all while surrounding you with an angry exhaust note.

The SQ7’s speciality is definitely straight line speed, but with the adaptive air suspension it really does have two characters. Find a fun road and you can have way more fun than you’d expect from a seven-seat SUV, the grippy tyres doing a valiant job of holding on in corners.

In normal driving, it’s comfortable too. Pop it into comfort mode and you’d never know there’s supercar performance under the bonnet, as it just feels like a normal Q7. We found the best compromise was to put the suspension into comfort while keep a more dynamic engine response and exhaust note, as this delivered performance without sacrifice ride quality.

Audi’s SUV range has an imposing presence, and with the Q7 being the biggest of them all, that’s especially true here. While people give BMW grief for its big grilles, the Q7 rocks up with a big mouth – yet somehow it works really well.

When it comes to the S model, it gets a sportier look, with large air intakes and silver blades in the lower front bumper, as well as a quad-exit exhaust and rear diffuser at the rear. The changes sound fairly subtle on paper, but they combine to give the SQ7 a suitable aggressive appearance without looking too wild.

Audi has been absolutely nailing its interiors lately and the SQ7 is no different. The first thing you notice is just how huge this SUV is, with the passenger door far out of reach. Your passengers will love how much space they have both front and rear.

But then your eye is drawn to the ultra-modern design, with the twin central screens and a third display ahead of the driver. We’ve come to lament the reduction of physical buttons, but Audi has arguably the best touch system in the business that makes its system much more usable than most.

The materials are all of the highest quality, too, with expensive-feeling leather upholstery, while the few physical buttons on show feel solid and nicely designed.

Prices start at £79,845 for the regular SQ7, which gets you all of that V8 performance, air suspension, all-wheel-drive and S-specific styling, as well as 21-inch alloy wheels, LED headlights, heated sports seats, three screens and cruise control.

The Audi SQ7 seems like an answer to a question that nobody asked, but from the moment you set off and enjoy that powerful V8and learn just how capable this large SUV can be, you can’t help but fall in love with it.

But it’s the SQ7’s breadth of abilities that impress the most. Sure, it’s fast and surprisingly agile, but if you just want something comfortable to eat up miles it can do that too, all while surrounding you in a sumptuously appointed cabin.

As far as one-size-fits-all motoring goes, the Audi SQ7 makes a compelling case for itself.