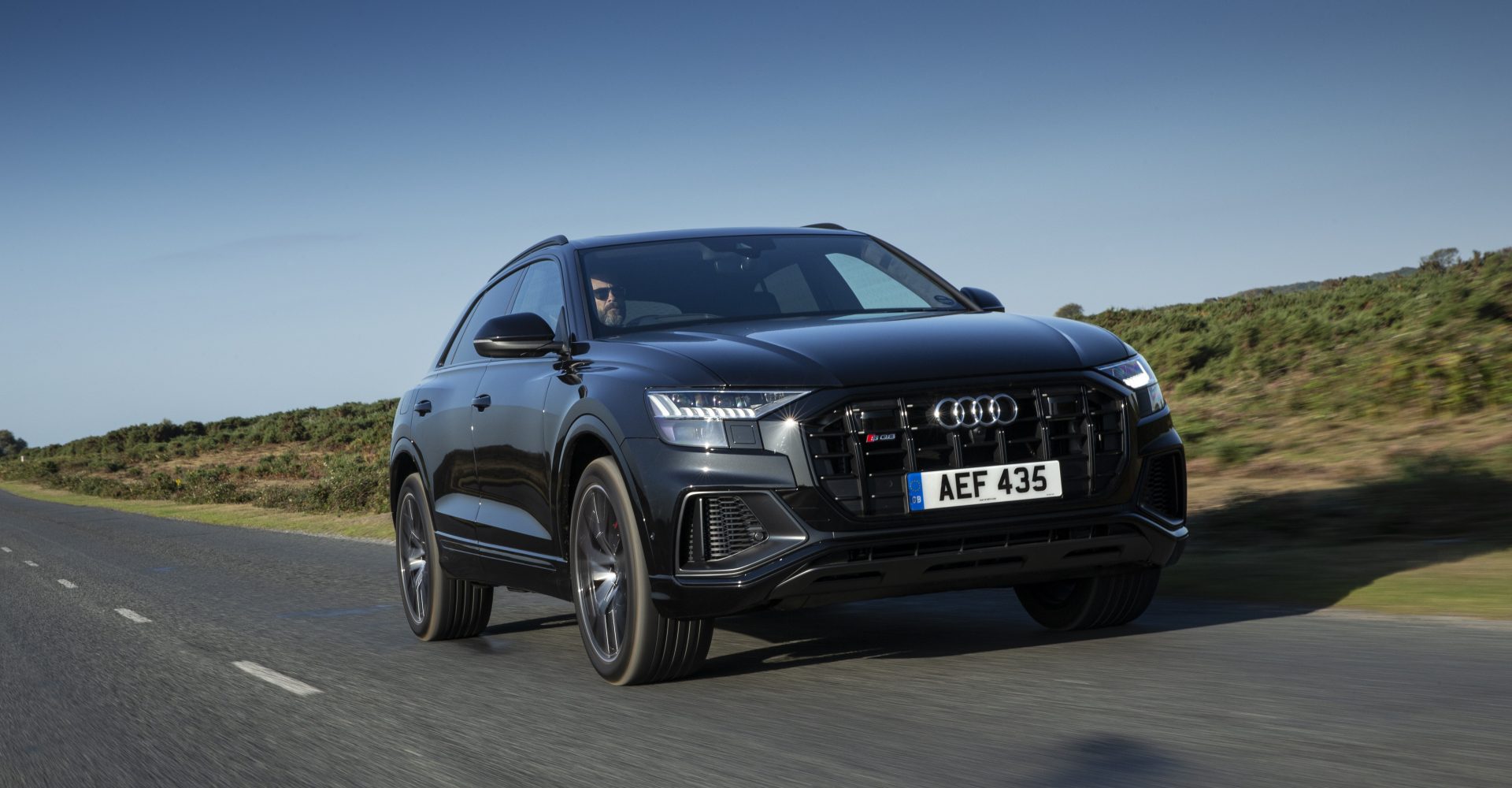 Take a look at a car manufacturer’s line-up, and it’s clear that, nowadays, there’s never a niche too far. Whereas in previous years it may have been a hatchback, an estate and an off-roader, there are now compact crossovers and coupe-styled SUVs like this – Audi’s SQ8.

Based on the same platform as the Q7 but with a more dynamic, angled appearance, the SQ8 offers up an even more imposing look than you get from Audi’s usual line-up of SUVs. But do the looks take anything away from Audi’s new range-topper? Let’s find out.

The biggest change here are those looks. Sharp, angular and just a little aggressive, the SQ8 is a car which is extremely hard to miss. Our test car, in Vorsprung Edition trim level with its black trim pieces and black metallic paint, looked particularly evil.

But because of that sloping roofline you only get five seats – whereas in the SQ7 there are seven. So already, because of styling, practicality has taken a hit.

Inside, there’s Audi’s latest fleet of in-car tech too – but we’ll look at that in a little more depth later on.

The SQ8’s engine is a thing of wonder. It’s a 4.0-litre V8 diesel with 429bhp and an incredible 900Nm of torque. It’s fitted with a pair of traditional turbochargers and a third electric-powered compressor, which is driven by a 48-volt system.

It also has a small lithium-ion battery and belt-alternator starter, which turns the SQ8 into a mild hybrid. It’ll automatically cut off the engine when coasting at speeds of between 34 and 99mph, while also helping when pulling away from a dead start.

Audi claims the SQ8 will return 30.7mpg while emitting 205g/km CO2, with both figures being pretty much par for the course for the segment. Power is sent to all four wheels via Audi’s quattro system and an eight-speed automatic transmission.

The first thing you notice when you get behind the wheel of the SQ8 is the sheer size of the thing. It’s almost as imposing to drive as it is to look at, in fact, with quite a narrow windscreen meaning it’s not the easiest of things to see out of. That said, you get acclimatised to the car’s proportions quickly enough.

That 4.0-litre V8 is a wonder, though. Strong and torquey, it’s remarkably refined at a cruise and brutishly powerful when accelerating. That it manages to heft the SQ8’s more-than-two-tonne body from 0-60mph in 4.6 seconds is scarcely believable, and the fact that it can return up to 30mpg even more so.

The well-weighted steering means that you have a relatively good idea of what the front wheels are doing – even if there’s barely any feel – but the car isn’t all that dynamic in the bends. Certainly, it feels like more of a point-and-squirt performance SUV than one destined to monster corners.

The SQ8’s looks are likely to divide opinion. Some may enjoy how angry it looks, and the way that the huge front grille appears to want to swallow up all other cars in its way. Of course, others may think that the Audi looks far too aggressive – but then looks are down to the opinion of the individual, of course.

The SQ8 links up well with other coupe-styled cars in the range, such as the Q3 Sportback. There’s a distinct look to all of the firm’s cars, and though they may not be to everyone’s tastes, it’s hard to fault the way Audi has managed to design a distinct ‘family’ face for its cars.

Costing well over £80,000 as standard means there is a fair amount of expectation levelled at the SQ8’s cabin. Fortunately, it’s a very well made place to be with plenty of high-end materials and a solid level of fit-and-finish. The new twin-screen setup dominates the centre of the cockpit, and it does help to give the SQ8’s cabin a particularly futuristic feel.

There’s acres of space for those sitting in the back too while that sloping roof doesn’t impede on headroom too much.

Though it can’t quite offer as much boot space as the Q7, there’s still 605 litres of boot space to play with in the SQ8. Fold the rear seats down and this rises to 1,755 litres – more than enough for most occasions, then.

Being one of Audi’s most premium models means that the SQ8 is laden down with equipment. As we’ve mentioned, the infotainment system with its pair of screens is one of the highlights and it’s as easy to operate as it is impressive to look at. The large ‘virtual cockpit’ display in the main instrument binnacle ahead of the driver is another system we’ve come to take for granted in Audi models and it is, yet again, very good to use in the SQ8.

Our Vorsprung Edition car added a high-quality Bang and Olufsen stereo, panoramic sunroof and heads-up display, which only helped to bolster the impressive level of standard equipment. In all, there’s more than enough equipment to keep most people happy and it goes towards justifying the car’s hefty price tag, too.

The SQ8 may fill a niche that we didn’t know needed filling, but it’s a genuine contender in the performance SUV segment. That engine dominates proceedings with its punchy performance and elegant refinement giving the SQ8 a luxurious yet no less exciting edge over its rivals.

Outright practicality may be down on other models, but elsewhere the SQ8 triumphs as a truly impressive product and one which we’re sure will be popular with buyers.