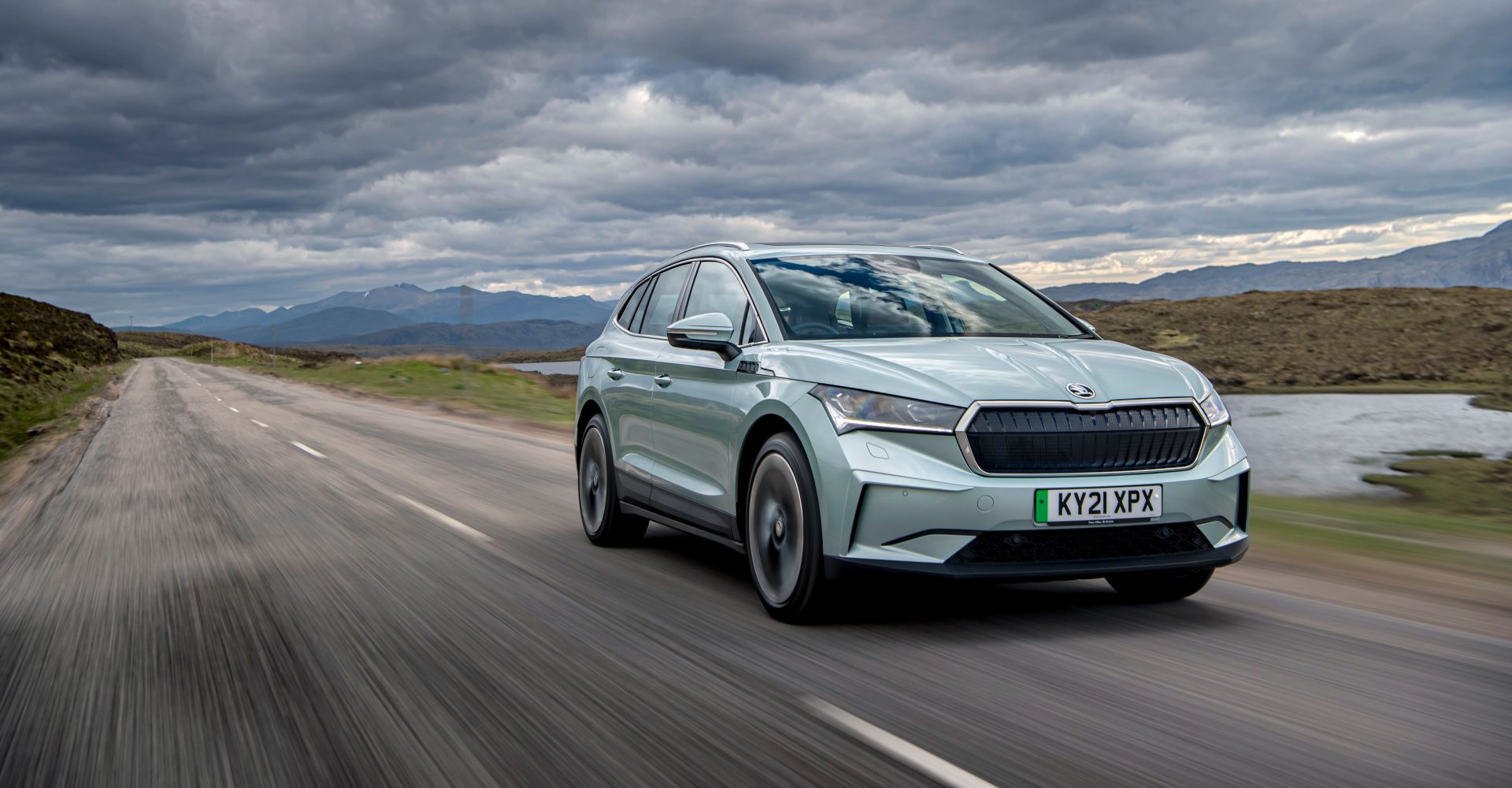 The sheer number of electric vehicles being offered by manufacturers appears to increase with each passing day. More than ever, we’re seeing battery-powered models take a place at the forefront of a carmaker’s plans, with pretty much everyone wanting a slice of the EV action. And Skoda is no different.

Because although it has offered its compact Citigo-e for some time, it hasn’t yet built a long-distance, premium-feeling EV – until now, that is. The Enyaq iV signifies a new phase for the Czech firm and brings a genuinely next-level platform which it hopes will ensure it remains competitive in this ever-expanding market. We’ve been finding out what it’s like.

Residing underneath the Enyaq iV’s long, blocky exterior sits Volkswagen Group’s dedicated electric MEB platform. It’s the same as the one you’ll find underpinning cars like the Volkswagen ID.4 and Audi Q4 e-tron and it allows the Enyaq to be offered with a variety of different battery options and – as a result – different ranges, catering for all manner of price points and needs.

Inside, the platform affords the Enyaq with a spacious cabin and a well-sized boot – there’s 585 litres of storage space, in fact, rising to 1,710 litres when you fold the seats down. Plus, as it’s a Skoda there are loads of ‘Simply Clever’ features dotted across the car, including an ice scraper in the boot door and dedicated smartphone pockets on the seatbacks.

Our particular Enyaq iV came in ‘80’ specification, which brings the largest battery available and therefore the longest range. A 77kWh battery is linked up to a single 150kW motor driving the rear wheels and, Skoda claims, the combination will return up to 332 miles from a single charge. As standard, the Enyaq can accept a charge at speeds of up to 50kW, though our car benefitted from an optional 125kW charging speed – a must-have feature for £440. With it, a rapid charge from 10 to 80 per cent will take just 38 minutes. When connected to a standard 7.4kWh home wallbox, a full charge from empty to full will take around 13 hours.

In terms of performance, the Enyaq will go from zero to 60mph in eight seconds before topping out at 99mph.

One of the key reasons why the Enyaq iV drives so successfully is that it largely feels like any regular car. Sure, there’s that tell-tale boost away from the line that few petrol-powered cars can match, but for pottering around at medium speeds the Enyaq feels – if anything – just normal. It’s at these more sedate paces where it feels the most at home – gather a little extra speed and the car’s weight does make itself known. The steering is far heavier than we’d have expected, too, but this gives the car a planted feel.

At motorway speeds, it’s quiet and refined and it doesn’t run out of puff, either, so overtakes are a breeze. We’d only argue that cars fitted with larger wheels – our Enyaq sat on huge 21-inch alloys – suffered from a slightly choppy low-speed ride, not helped by that weight. If it were our car, we’d be going for a smaller wheel size as it really helps to soften off the worst of the bumps.

The design of the Enyaq iV ties in with the rest of the Skoda range. As a result, we’ve got a car that doesn’t scream to make its presence known, but trades on smart touches and a great attention to detail. It’s a big car, mind you, and it’s far larger in the metal than it appears in images. What that does is give the Enyaq a fair degree of presence without the need for showy styling touches.

The front grille is large and similar to the one you’ll find on the latest Octavia while around the back there’s the Skoda name emblazoned on the boot in bold letters. It’s a smart look and – to our eyes at least – one of the more attractive yet down-to-earth EVs we’ve seen so far.

As with all other Skoda models, the Enyaq really majors on practicality and user-friendliness. It’s why there are deep door bins and loads of cubbies for your odds and ends, while the lack of any transmission tunnel frees up space for those sitting in the back. The seats are broad and comfortable, while physical controls remain present – those for the wing mirrors and windows, for instance, are still conventional switches rather than touch-sensitive pads as we’ve seen on the Volkswagen ID.3.

The material quality is good, too, while a variety of different LED lights inside give the cabin a futuristic look during the night. We’d still argue that the integration of all the main functions into the main screen makes things a little more difficult than they need to be, but at least there are physical button shortcuts below to help speed things along.

Value for money lies at the forefront of the Enyaq’s list of priorities, as it does for all Skoda versions. It’s why even entry-level cars boast 19-inch wheels and a 13-inch infotainment display, alongside keyless entry and dual-zone climate control.

Our ‘80’ car got an increased level of kit, with highlights including a heated steering wheel that – most crucially – incorporates paddles, allowing you to adjust how much regeneration you get. It’s a really useful feature and one well worth having. Our car also incorporated the EcoSuite package which added beautifully trimmed brown leather seats and loads of chrome accents that really help to boost the Enyaq’s premium feel.

The Enyaq feels like one of those electric cars which could quite easily slot into the space left by a conventional petrol or diesel car. This 80 version, with more than 300 miles of range, should put to bed any real fears around range anxiety, while the ability to charge at super-quick speeds means that top-ups needn’t take an age.

It does what all Skoda’s current range of cars do – it gets the job done. Sure, there might be flashier EVs around but if you’re thinking of switching to electric and want a car that won’t feel completely alien, then the Enyaq is for you.