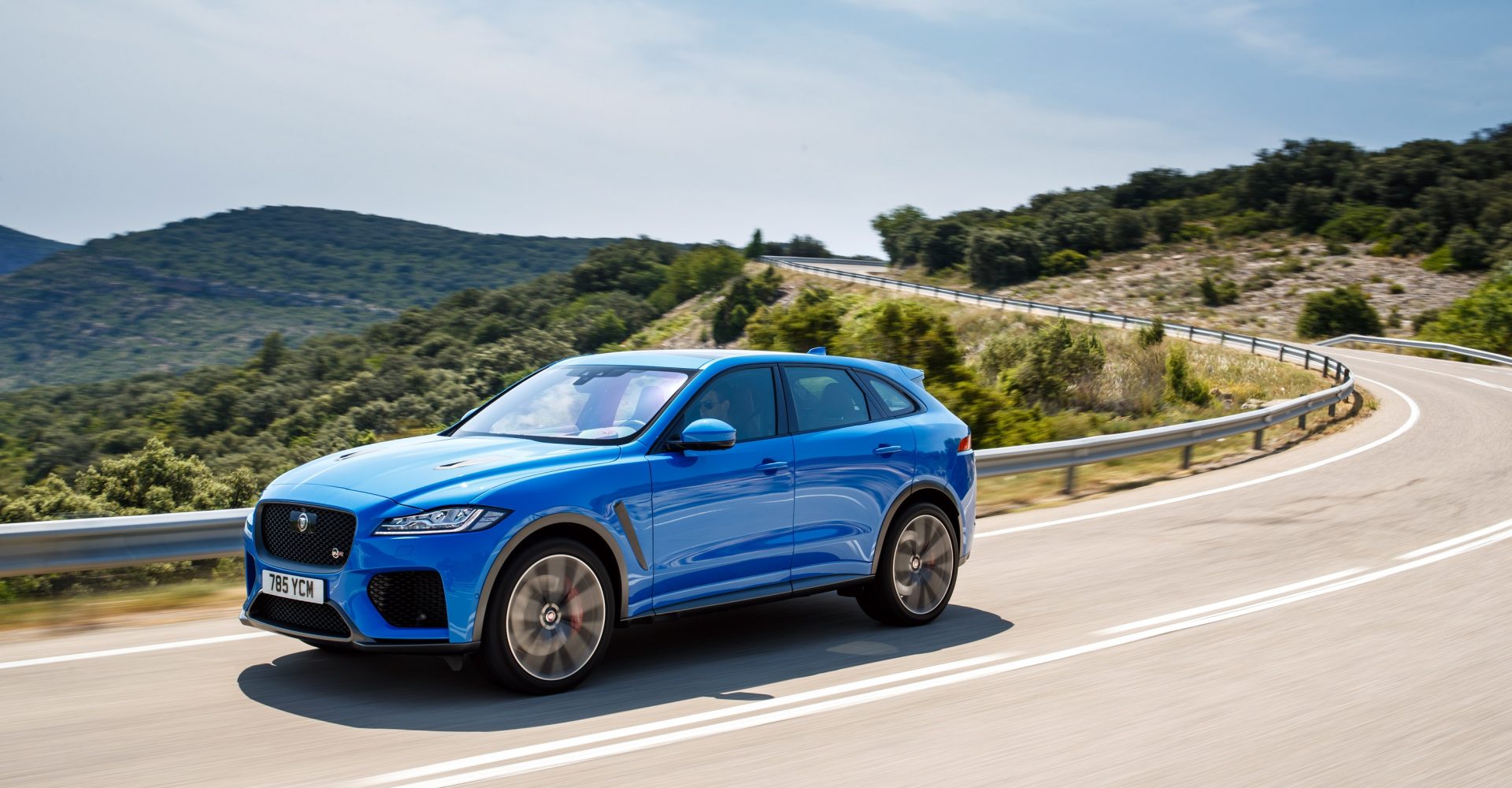 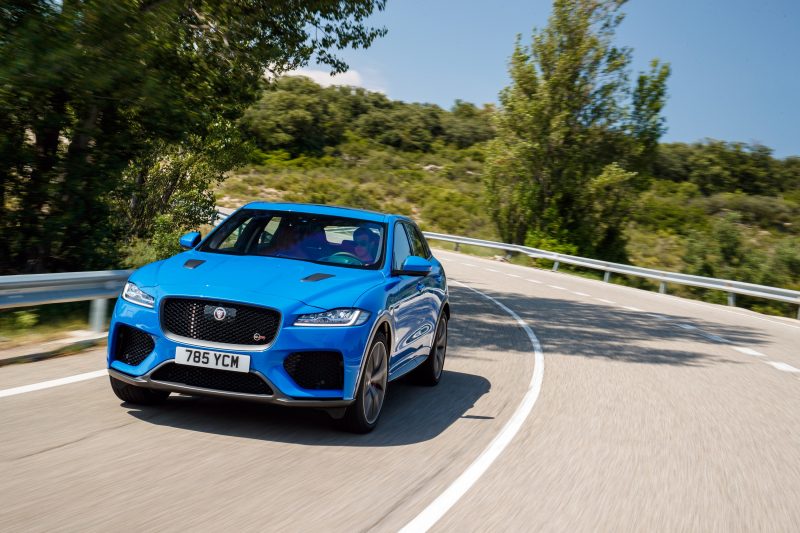 When it comes to SUVs, Jaguar doesn’t exactly have much heritage – it’s built three, all in the last three years. The F-Pace, though (the largest of the bunch) has proven to be a hit, and it seems sister company Land Rover’s expertise in building high-riding 4x4s has rubbed off.

So what do you do when, as a small British car manufacturer, you see German brands having great success with performance SUVs such as the Mercedes GLC 63 or the Audi SQ5? Why, you go in for a slice of the same pie – but in a uniquely Jaguar way. The real question is – can the F-Pace SVR can conjure up the same magic that fast Jaguar saloons have always done?

You can’t miss the F-Pace SVR’s brutal styling details. It positively bristles with vents, aerodynamic additions and mean-looking trim – all of which, we’re happy to report, is functional.

Marking it out under the hood is a Jaguar Land Rover staple – the brand’s near-iconic 5.0-litre supercharged V8 engine. All that power needs some taming if this car is to handle as well as its lower-riding siblings, so Jag’s fettled the suspension and chassis to cope with the huge 542bhp output.

Sadly, this model doesn’t come along as a mid-life facelift to the F-Pace – made especially plain by the newly updated XE it was launched alongside. The XE’s improved interior does make the F-Pace feel a little old hat. 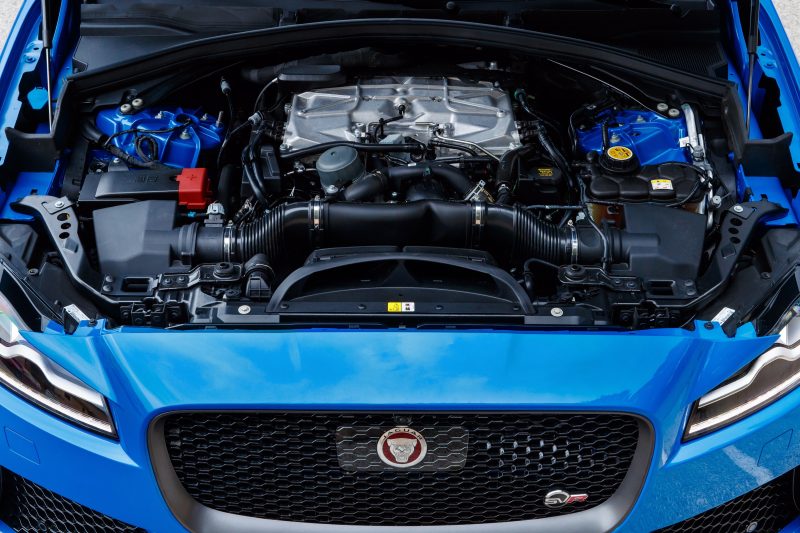 You could probably tell what’s under this bonnet just from the sound. The F-Pace SVR’s 5.0-litre supercharged V8 has seen service across the Jaguar Land Rover model line-up for several years now, and it’s a fantastically evocative piece of kit.

The numbers certainly make for good reading. The V8’s 542bhp and 680Nm of torque will push this SUV from 0-60mph in just 4.1 seconds and on to a blistering top speed of 176mph.

It’s a fantastic engine – smoother than its turbocharged rivals and with an enticing appetite for revs. It’ll settle down to a refined cruise, but press the loud pedal (and the ‘loud’ button for the adaptive exhaust) and you’ll struggle to hold in a gleeful cackle at the cacophony that erupts.

It’s paired to an eight-speed automatic gearbox, which is as smooth and quick-shifting as any other, and four-wheel drive, though it’s a system that heavily favours the rear axle. Running costs will, of course, be high – but the claimed 22.6mpg fuel economy figure is at least achievable. 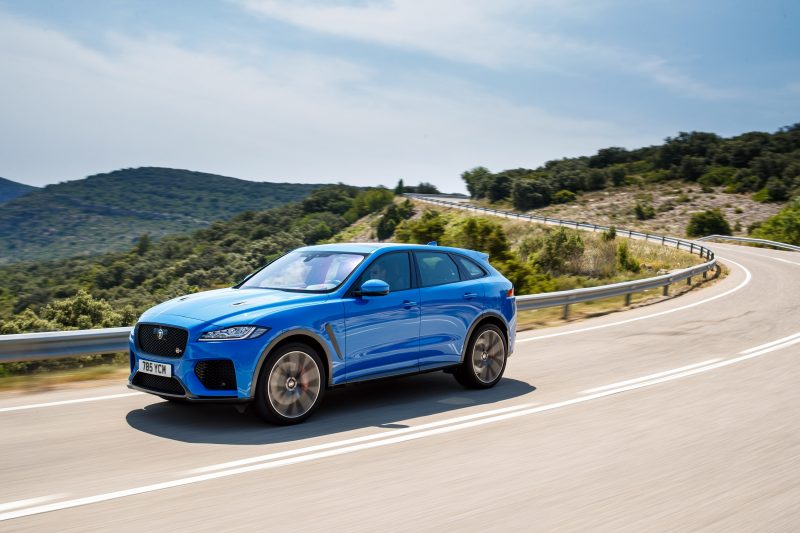 This isn’t a lightweight car, but Jaguar hasn’t tried to make it feel that way. Instead, all the controls have a pleasing heft and the steering is very neutral, balanced and intuitive. It’s very easy to judge your inputs, making smooth, fluid cornering an absolute breeze.

Sure, a comparable fast estate or saloon will behave itself better in the corners, but we’d be impressed if you could show us one that’s as comfortable. Even on the vast 22-inch wheels of our test model, this car rides beautifully – there’s many a sensible diesel that could take lessons. For a car such as this, which can flit from family bus to back road blaster at a moment’s notice, that’s important. 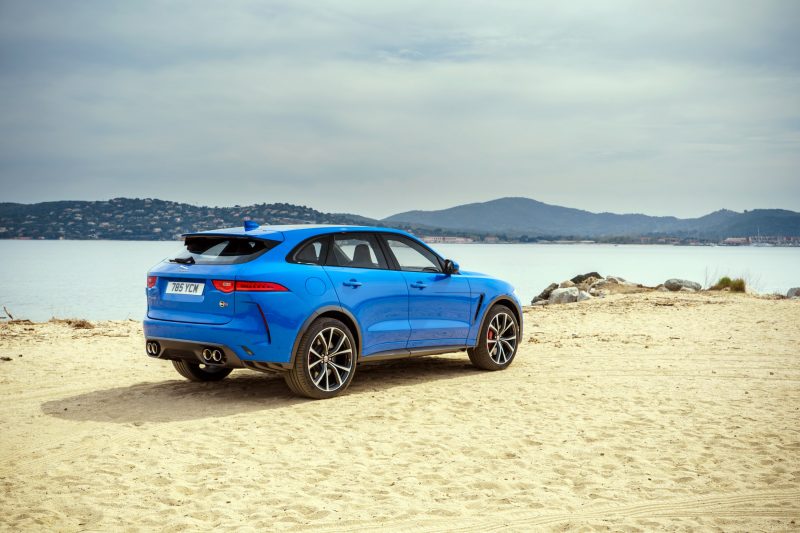 The F-Pace is a handsome car, but it’s definitely wearing a tracksuit in SVR guise – albeit a designer one. The snarling bonnet vents give it instant presence, but look more closely and it’s riddled with aerodynamic additions. They all have a practical purpose, though – there’s nothing on here that’s just for show.

Plenty of ‘regular’ F-Paces are specified with huge alloy wheels, which is perhaps why these 22-inch examples look so well at home in the SVR’s arches. Elsewhere, it’s business as usual – this is a nicely proportioned, handsome SUV with plenty of Jaguar’s now-signature design detailing. 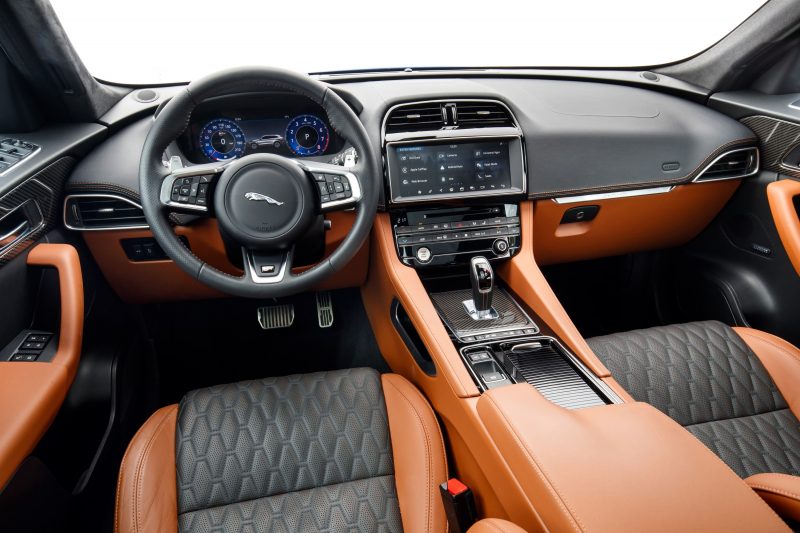 Unfortunately, the F-Pace SVR does feel its age on the inside – a problem not helped by the newly facelifted XE saloon. We’ll start with the good – it’s decently spacious for four adults, material quality is generally high and of course, the great ride makes for comfortable progress for all occupants.

Jaguar’s infotainment has improved, and while it’s not as slick as the very latest Mercedes system it’s on a par with BMW’s iDrive. The same can’t be said of the digital dials, though, which feel basic alongside Audi’s brilliant virtual cockpit. Again, it’s a shame that the excellent Touch Pro Duo system hasn’t migrated from the XE.

Other details are disappointing, such as the cheap-feeling and difficult to use climate control panel or the heated seat controls buried in a menu. Taller drivers will also find the single-piece headrests of the front sports seats tend to jab them in the neck, which we found particularly annoying. 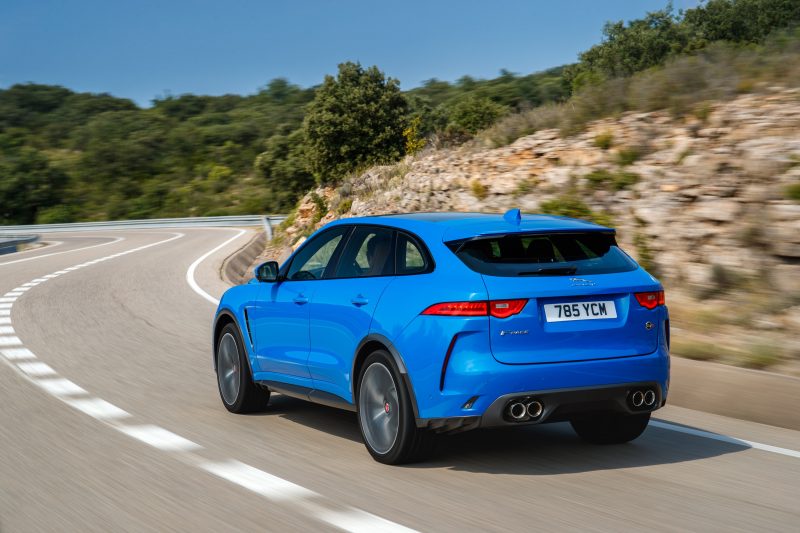 £75,000+ isn’t a small amount to spend on a car, but Jaguar offers a generous kit list to help ease the blow. All F-Pace SVRs come on 21-inch wheels, with perforated Windsor leather upholstery inside and a beefy SVR bodykit outside. The front seats are heated, cooled and electrically adjustable, and adaptive LED headlights improve night driving as well as the car’s looks.

The options list makes for happy reading, too – Jaguar won’t charge for different paint finishes or interior colour options, so you don’t have to pay to personalise. We’d suggest ticking the box for the Driver Assist Pack, which brings adaptive cruise control, blind-spot monitoring and high-speed emergency braking as well as park assist and a 360 degree camera. The upgraded Meridian surround-sound system may also be tough to resist – though the standard stereo, also by Meridian, does sound great.

Jaguar’s first performance SUV is a fine effort. It’s packed with character, drives beautifully and looks brilliant. Though it may trail the likes of the Alfa Romeo Stelvio Quadrifoglio on outright focus, the slight compromises it makes in the name of usability are well worth it. If you can afford the running costs, this is a hot SUV you can – and will want to – use every single day.