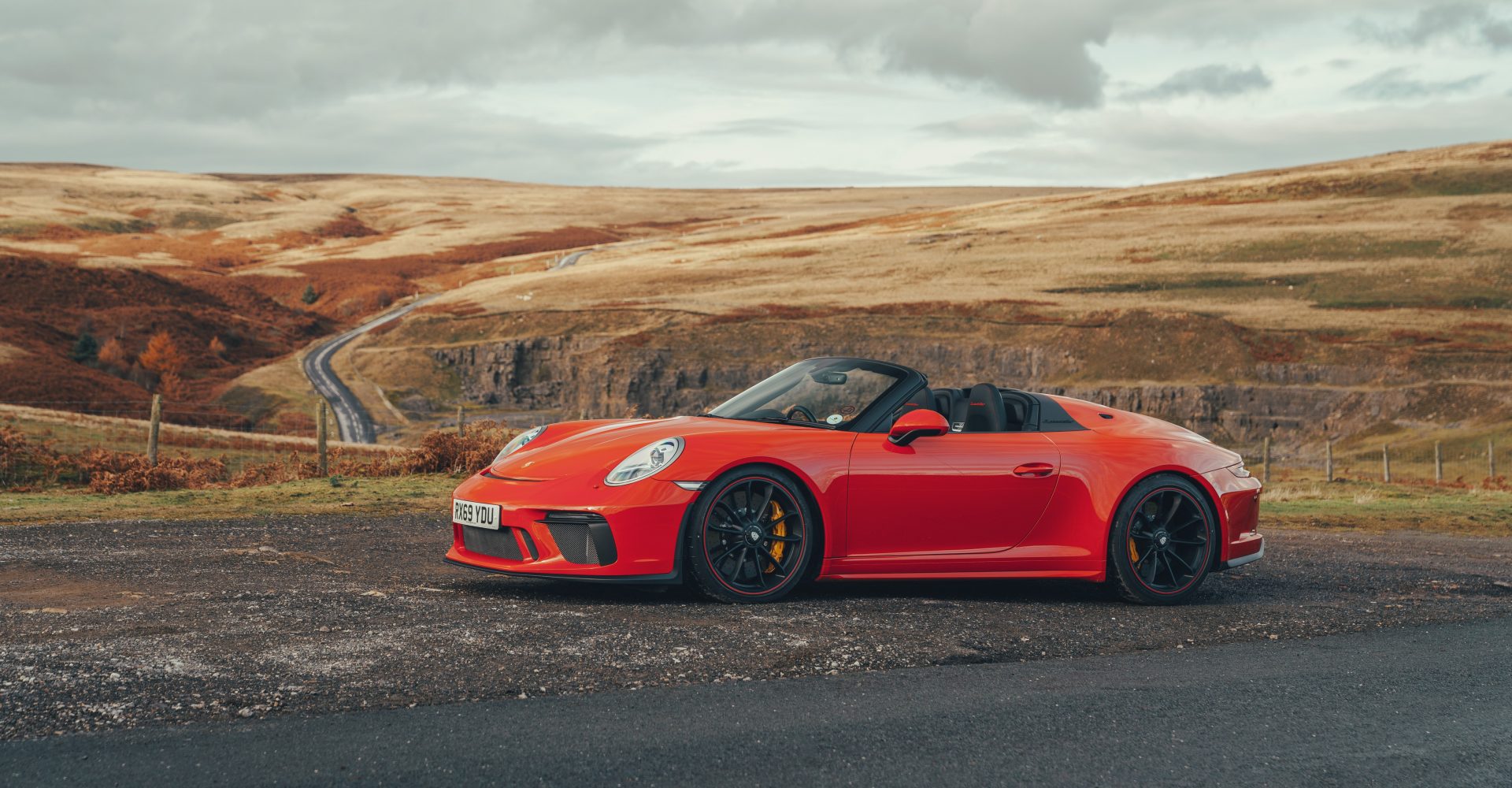 If you know your Porsche lineage well, you’ll know the 356 of 1948 was the genesis of the firm’s now-iconic sports car range. That stunning model is the inspiration for this new 911 Speedster model, which started life as a concept but now enters production in limited numbers.

It bears design cues from the classic model, but with modern, motorsport-inspired underpinnings. You might be taken aback by the £211,599 price tag, but with the 911 R and 911 GT3 serving as the ‘basis for development’, you’re getting the combination of two of the most highly sought-after Porsches in modern history coupled with retro-inspired styling.

Although largely based on the previous-generation 911 GT3 and sporting the Speedster name that’s been used on various Porsche models before, this is an all-new variant, being the first time the German firm’s GT division has been given the chance to make a drop-top.

Its stand-out features are the elegant roof – it’s manually operated and tricky to get to grips with – and the double-bubble rear section into which it folds, giving the Speedster its classic silhouette. There are also various weight-saving measures such as the carbon-fibre bonnet and interior door pulls, while downforce is optimised through aerodynamic exterior parts.

This being a Porsche 911, rather than sitting beneath the bonnet, the Speedster’s engine sits hidden away behind the driver. Famously rear-engined, this particular example is powered by a 4.0-litre, naturally aspirated six-cylinder unit making 503bhp and 470Nm of torque. 0-60mph comes up in 3.8 seconds and the top speed is 193mph.

And, when conditions allow you to give it full throttle, it feels every bit as fast as those numbers suggest – and then some. The fat rear tyres bite into the tarmac and there’s barely a moment’s hesitation before you’re absolutely catapulted forward, your eyes focused on a pinprick on the horizon as the straight-six’s raucous soundtrack dominates every other sense.

That’s not hyperbole, either. That something with such elegant styling features can be this stupid-fast is fantastic.

‘When conditions allow’ is an apt caveat for this test, though. Taking a 503bhp sports car to the deserted roads of the Northumberland wilderness is a recipe for greatness. Just not in November.

With the rain lashing down and roads resembling rivers, a full throttle blitzkrieg quickly feels more like a kamikaze mission as all that power tries hard to cut through endless standing water. Then there’s the steep roadside drops, keen to compound the misery brought on by any overeager throttle inputs.

And yet. Even driven well within its capabilities, the theatre of the occasion – the engine’s delight at being revved towards 9,000rpm and the noise that accompanies it – means the weather doesn’t dampen spirits.

When short sections of dry road do appear, charging on is euphoric. The Speedster’s suspension is stiff, with the rough roads unsettling the car and ensuring you remain switched on at all times. But swallow some brave pills and it feels happier once you’re pushing on, with the ride smoothing out and the sharp handling reminding you that Porsche’s GT division is full of engineering magicians.

Porsche detractors often mock the fact modern 911s still look a lot like the old ones. So, with a new 911 here directly inspired by the most classic of all the firm’s sports cars, could this be just another cynical marketing ploy to play off the brand’s heritage? Maybe. Does it matter when it looks this good? Not a jot.

Up front sits the familiar oval headlights, with large intakes in the front bumper hinting at the performance hidden out back. However, it’s the roof that makes this car stand out. In place it looks great, with the sweeping rear sections producing some interesting design angles.

Drop the roof though, and the rear buttresses become more prominent, rising up from the rear section behind the passengers’ heads to evoke imagery of classic roadsters. The whole rear section pivots up to contain the roof, too, so even the simple act of removing or replacing the drop-top becomes an event.

Inside, it’s typical Porsche fare, which is to say high-quality and restrained design. As standard, the model gets black leather upholstery with Speedster logos dotted throughout, black and white dials like the old 356 Speedster, and a badge between the seats to denote the serial number of each particular model.

It feels spacious for a two-seater, and despite being a performance-focused model, there are plenty of creature comforts and the feeling that you could conduct long journeys without tiring – though there are naturally some concessions to practicality in the cabin.

With a starting price of £211,599, the Porsche 911 Speedster is suitably well-equipped, with standard kit including 20-inch black alloy wheels, leather upholstery, an infotainment system that can be deleted, free of charge, to save weight, and a choice between 18-way adjustable sports seats or full bucket seats.

Naturally, you can go mad with the options, though given the extortionate starting point, nothing feels too outrageous. There’s a Bose stereo for £1,002 and a leather luggage set for £5,276, for example. Meanwhile, our test car had extra leather and red stitching for £2,147, a front axle lift system for £1,599, and extra LED lighting in the cabin that took our car to almost £220,000.

Just 1,948 examples of the Porsche 911 Speedster are being built, making this a special thing indeed. But it’s got more than just rarity on its side, marrying ballistic performance with a classic, iconic design.

Porsche’s GT cars are notoriously fantastic to drive, so it should be no surprise the first convertible GT continues this trend. With ballistic performance and an ultra-cool exterior design, the 911 Speedster almost justifies that ludicrous price tag.