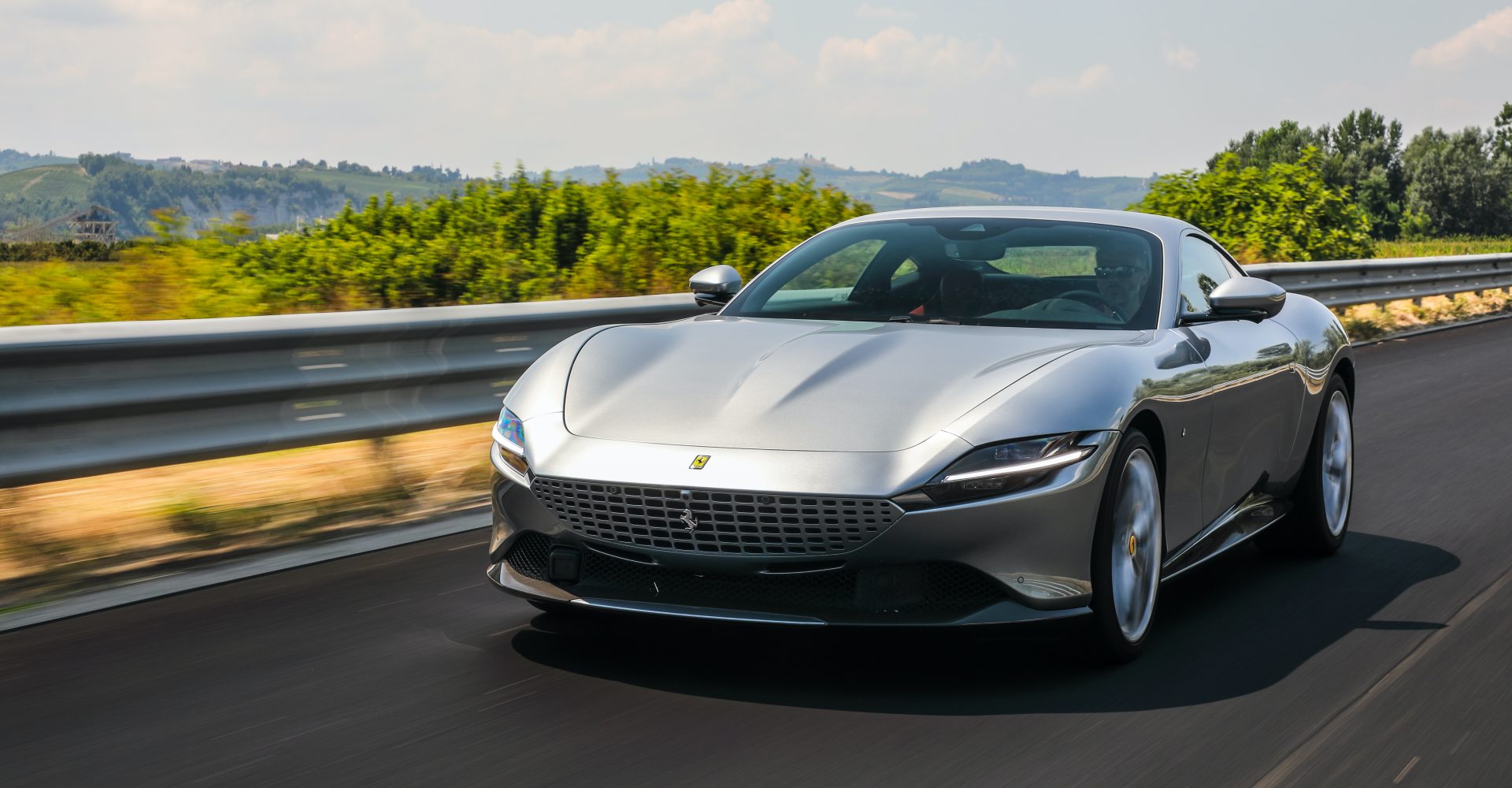 This is the new Ferrari Roma. It’s a car that the firm hopes will garner the interest of a whole new clientele – those looking for a comfortable yet involving cross-country GT car. And as a grand tourer, the Roma comes with a whole new range of requirements over and above Ferrari’s existing range of supercars.

But is the Roma up to the challenge, and has Ferrari succeeded in infusing it with all that makes its cars great, along with genuine long-distance useability? We’ve been behind the wheel to find out.

Looking at the Roma’s layout, you’re met with a typical GT setup; there’s a large V8 engine up front, drive to the rear and enough space for two adults and two children. There’s even a decent-sized boot. Yet while the Roma shares many components with the Portofino convertible, this is far more than just the drop-top with a fixed roof. No, Ferrari has worked extensively to ensure that the Roma is just as good in the bends as it is ploughing along highways.

The inside of the car has been fitted with the latest equipment the firm has to offer, with much of it only recently seen on the SF90 Stradale hypercar. So while the exterior is very much a nod to Ferrari cars of old, the cabin is as cutting edge as they come.

You’ll find the same 3.9-litre twin-turbocharged V8 engine under the bonnet of the Roma as you would on the Portofino, but extensive measures have allowed it to produce 20bhp more than in the drop-top model, now making 612bhp. The Roma also benefits from a new eight-speed dual-clutch automatic – the first time one has been used in a front-engined Ferrari – and it’s been refined and made smaller to not only help with shift times but also reduce emissions.

When it comes to performance, the Roma certainly punches hard; zero to 60mph takes a snick over three seconds while flat-out it’ll do 199mph. Despite this, it should return 25mpg while emitting 255g/km CO2.

How do you want a grand tourer to drive? You want it to be comfortable and refined, for sure, as well as fast in an understated way. And while the Roma achieves all of these traits – in comprehensive fashion, we might add – it’s the way this car handles when the roads get twisty that really impresses. It’s been given a sharpness and keenness to turn in that only Ferrari could achieve, while its ability to rotate in a controlled, fluid motion is genuinely impressive.

There are five settings on the new manettino mode selector – Wet, Comfort, Sport, Race (a first for a Ferrari GT car) and traction control off – with the variety of selections on offer giving the Roma a real breadth of ability. There’s also the bumpy road button – now integrated into the manettino and activated by pressing the entire button – which adds a suppleness that will no doubt prove immensely useful in the UK.

The steering is classically Ferrari-quick off-centre, so while the Roma offers genuine composure when on the straight and narrow, its ability to change direction at a moment’s notice is nothing short of amazing. Oh, and then there’s the performance. The V8 gives the Roma a brawny, muscular kind of approach to acceleration, with a great deal of push available throughout the mid-range, though exploring the upper echelons of the rev counter is just as rewarding as riding the wave of torque available lower down.

Ferrari has taken a look through its back-catalogue of greats for the Roma’s design inspiration. In our eyes, it appears like nothing else that the firm offers today, with a classically designed front grille making a real impression. The sharp front end and razor-cut headlights give the car a real look of purpose, while the long bonnet section offers a classic look that has been used on GT cars time and time again.

It might not be as flamboyant as some of Ferrari’s other supercars, but it’s not meant to be; this is a car which has been designed to be whisked across countries in a discreet fashion.

The Roma has been designed around a 2+2 layout. And while there are rear seats there, they’re really only suited to children – something Ferrari now openly admits. However, they can be folded down to increase the space you’ll find in the boot, accessed via a hatch-style boot opening. It’s a usable area, with a decent opening allowing for a few weekend bags or even more should you fold down the back seats.

Up front, you’re sat low and ‘in’ the car, with a steering wheel that offers plenty of adjustment. The wing mirrors are adjusted via a new touchscreen panel down at the side of the wheel, and while it’s a futuristic touch, we’d have probably kept this as an analogue controller for ease of use.

As we’ve already mentioned, the Roma has been fitted with Ferrari’s latest in-car setup, which sees its traditional analogue rev counter ditched in favour of a widescreen display, and the central heating and ventilation controls (among others) accessed via a tablet-style screen in the middle of the cabin. The wheel itself has also been redesigned and now incorporates haptic-feedback controllers for that driver display, as well as for the audio controls, indicators, windscreen wipers and cruise control.

The new infotainment setup is one of the best we’ve seen from Ferrari; it’s easy to use and responsive, while the new drivers’ display allows you to keep your eyes on the road.

Our only point of contention with this new setup is the engine starter button. It’s now a touch-sensitive button at the bottom of the steering wheel, and while its operation is easy enough it’s lost some of the sense of occasion you used to have with the big red starter buttons of old. Maybe it’s the inner eight-year-old in us, but there’s something exceedingly cool about starting a car with a loud, red and purposeful button, and this just misses out on that.

Though the Roma takes the place at the entry point of the Ferrari range, this is anything but an entry-level car. It drives with such verve and precision that it outclasses rivals left, right and centre, while its refinement and comfort allow it to appeal to those who want a Ferrari they can use day-in, day-out.

Combined with head-turning looks, this is a car which serves to show just what Ferrari can do when it is on tip-top form. Encapsulating some of the energy and edge from its more hardcore supercars and transplanting it into a useable GT car could have been difficult, but somehow Ferrari has achieved it in all-encompassing fashion.