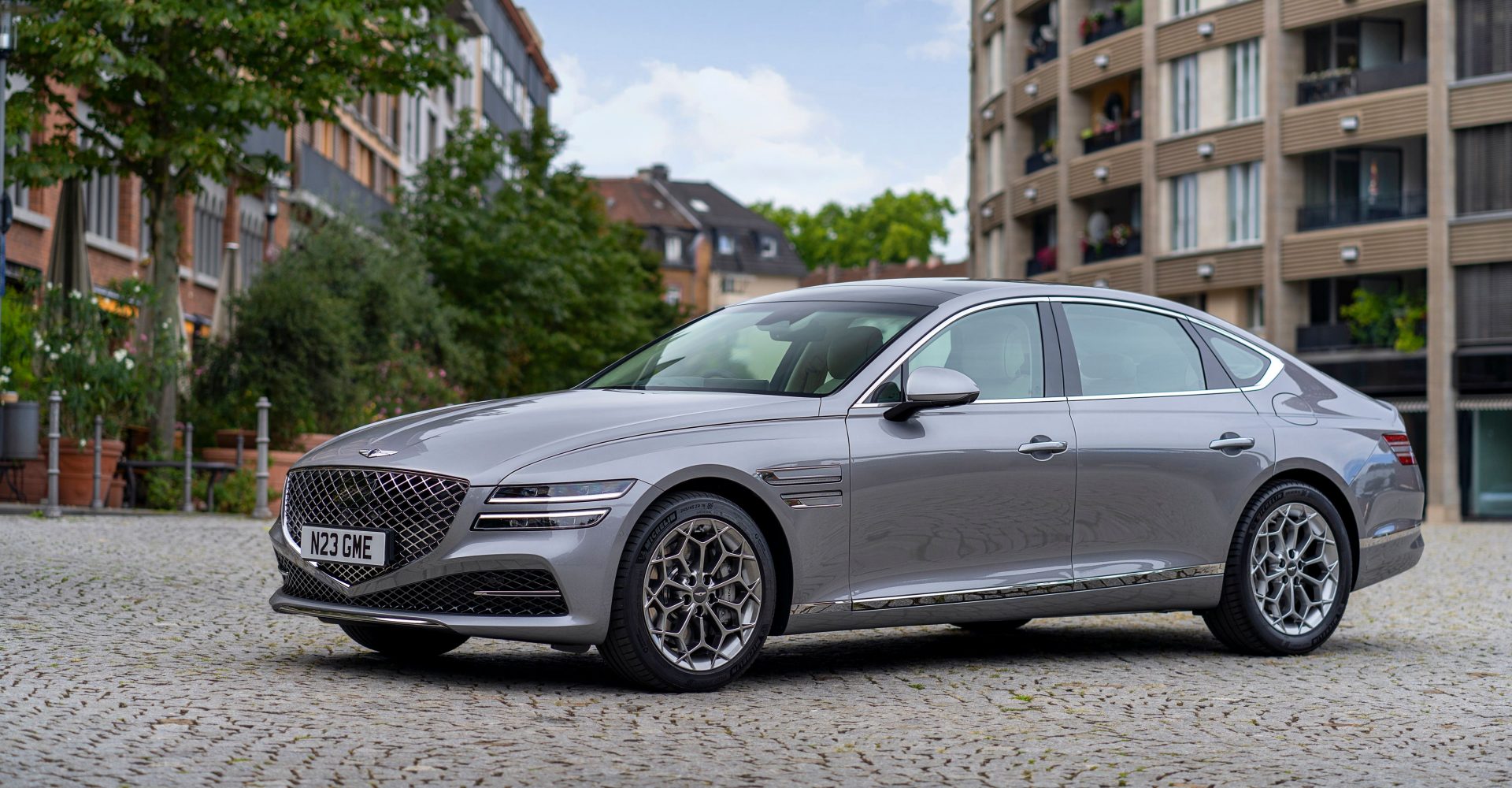 Over the past few decades, the premium segment has proved almost impossible for newcomers to break into, such is the stranglehold Audi, BMW and Mercedes-Benz have on it. Volvo has made a great case for itself, while Lexus has long been a solid left-field alternative. Tesla, too, with its electric vehicles.

But many others have tried and failed, which makes Genesis’ attempt interesting. It’s new to Europe, but the spin-off from Hyundai actually launched in 2015 in its home market of South Korea. It has been selling cars in various markets, shifting 130,000 units last year, and hopes to increase that in Europe with very competitive pricing.

Today we’re testing the G80, which is a large saloon – think Audi A6 or BMW 5 Series rival. The highlights are that this is the first model to feature the brand’s new design language, it has undergone extensive development on European roads (including the Nurburgring circuit), and has extensive safety kit, achieving the full five stars in Euro NCAP safety testing.

Away from the car, the sales model is pretty interesting too. Genesis doesn’t have traditional dealerships, instead having ‘studios’ in retail spaces where buyers can see cars, test drive them and place orders. There are three in Europe, including one in London, though this will expand in the coming years. There’s no bartering nor deals to be had, so whether you buy online or through the store, the price is the price, with a few options and packs available as upgrades.

Finally – and this is marketing speak but sounds like an interesting concept in theory – Genesis says it’s focusing on the customer experience rather than just sales numbers. So you get a five-year care package included in the price with your own assistant who can arrange services and repairs among countless other things, collecting your car and dropping off a courtesy model.

There are two engines available, a 2.5-litre turbocharged petrol and a 2.2-litre turbo diesel. Both are four cylinder units and mated to eight-speed automatic transmissions, while the former is paired with all-wheel-drive and the latter being rear-driven.

We tested the petrol, which is a smooth and refined unit. It has 300bhp, which is just enough to feel spritely when you put your foot down, while the power delivery is impressively linear, making it perfectly suited to the luxury driving experience. Thanks to clever noise cancellation technology it’s quiet, too.

While the German trio are keen to include some handling prowess to varying degrees, it’s immediately obvious that the G80 has absolutely no aspirations of being hustled down a winding country road. This thing is all about comfort.

It’s supremely comfortable thanks to soft suspension and clever tech that uses cameras to prepare the car for bumps and potholes – this car honestly smoothes out potholes better than anything I can remember. The trade off is that it leans a lot in corners, demanding smooth inputs, something made trickier by surprisingly direct steering.

Once you’re tuned into its more leisurely approach to things it quickly becomes one of the best motorway cruisers out there. And it relaxes you in the process. It’s aggressively safety-conscious, though, so you might find you’re switching off some of the more intrusive driver aids pretty quickly…

Beauty is in the eye of the beholder but the Genesis design language isn’t something most will immediately gel with. Its overall silhouette is actually very aesthetically pleasing, with sleek lines and a well-proportioned glasshouse. But the details on the nose are incredibly fussy, with the twin-headlights and massive grille taking some getting used to.

The rear is slightly more conventional, but the drooping bootlid and wide proportions bring back memories of the previous-generation Audi A7. That has become a classic design, so perhaps the same will be said of this. Finally we have the alloy wheel designs, which are mostly pretty nice but include some incredibly fussy designs and maybe too much shininess… British buyers tend to lean towards subtlety.

If the exterior design is a bit of a challenge, the interior isn’t. Often the downfall of the premium/luxury newcomer is the cabin, especially those spun off from mainstream manufacturers. You can make a car look as fancy as you like, but if it shares materials and switchgear with a £15k hatchback, buyers in this market won’t be impressed.

Fortunately, there’s none of that in the G80. The materials all feel high quality, the seats are fantastically comfortable, and the displays are clear, well-designed and easy to use with a good mix of touchscreens and physical buttons. Perhaps the only complaint? The drive gear selector knob feels a little cheap, though the scroll wheel above that controls the infotainment display is a bit different but works well.

There are two trim lines, called Premium Line and Luxury Line. Prices start at £36,100 and £40,900 respectively for the diesel, and £41,000 and £45,800 for the petrol. Both models get loads of driver assistance technology, safety kit, and the cabin screens with Apple CarPlay and Android Auto.

Further upgrades can be added through packages, such as the Innovation Pack, which adds various extras such as a head-up display, 3D-effect cluster display, and wireless phone charging. There’s also a panoramic sunroof option, a comfort-focused upgrade, improved sound system and more.

So the big question is this: Can Genesis break the big German three’s stranglehold on the premium car market? It’s impossible to know if buyers will gel with the brand to make this possible, but the South Korean firm has found itself an interesting niche.

The cars are great inside and supremely comfortable to drive. And they’re also fantastic value, undercutting similarly specced German rivals considerably. And if the ownership experience lives up to expectation, it’s exactly what buyers want in this market without having to break the bank to get it.

If Genesis really is going to make a success of itself in Europe, it has given itself a fantastic base to do so.