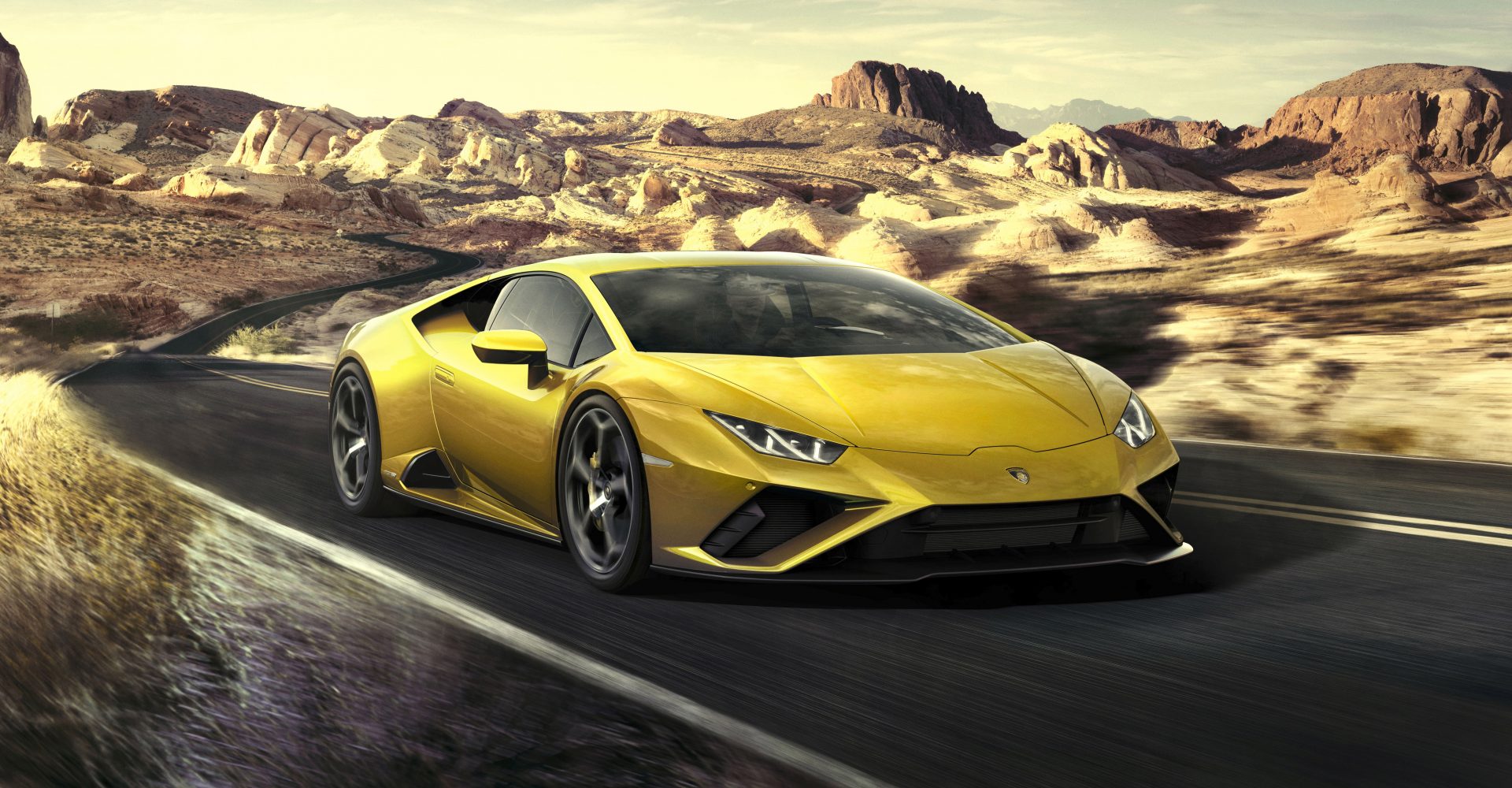 It’s perhaps a mark of just how desirable Lamborghinis are that a car with ultra-exotic looks, a screaming V10 engine and more power than anyone could ever need on the road could ever be considered the ‘entry level’ model. However, that’s exactly what we have here in the form of the Huracan Evo RWD.

Although the Italian supercar maker has earned a reputation for building flamboyant all-wheel-drive performance monsters, in recent years it has been the rear-wheel-drive models that have been considered the best drivers’ cars. Now the Huracan Evo line-up has been graced by such a variant, it’s time to find out if it’s still the one to have…

Unsurprisingly, it’s the switch from all- to rear-wheel-drive that’s required the biggest updates. The drivetrain has been overhauled, with Lamborghini developing a new traction control system specifically for this model. It has been designed to deliver torque smoothly, even before the car is fully stable again, to create a more predictable power delivery.

It also gets the latest version of Lamborghini’s infotainment system and styling revisions to differentiate it from the four-wheel-drive version.

Elsewhere it’s largely similar to other Evo models, with a body made from aluminium, carbon-fibre and thermoplastic resin to keep weight low, servo-assisted Dynamic Steering (which runs a RWD-specific tune) and a seven-speed dual-clutch gearbox.

If Lamborghini failed to deliver on every aspect of this car, but still gave it this engine, it would honestly be tough not to recommend it. The 5.2-litre, naturally aspirated unit makes this car a joy to drive. It has a fantastically smooth yet ludicrously punchy power delivery that makes the charge to the redline utterly addictive.

And the noise is just something else. While Audi has seen the R8 (the Huracan’s ‘sister’ car) become quieter thanks to a gasoline particulate filter needed to meet emissions regulations, Lamborghini found a clever trick to avoid this, so it sounds like an old Formula 1 car when you’re really pressing on.

Facts and figures are almost irrelevant in a car that delivers such an emotional experience, but they help to complete the performance picture. It makes 602bhp and 560Nm of torque with a top speed of 202mph and a 0-60mph time of just 3.1 seconds. It’s rapid.

In recent years, the biggest complaint that’s been levelled at the Huracan is its trick Dynamic Steering technology, which artificially minimises the steering input needed. However, Lamborghini has been constantly developing it, and in the Huracan Evo RWD, it’s at its best yet. While you might lose some precision on track, for road driving it delivers an incredibly precise response to inputs and makes the car feel more agile.

Elsewhere, it’s clear the Huracan has been tuned to be driven quickly. At slower speeds it jiggles and skips on its stiff suspension, but once you’re pushing on the car settles and rides out road imperfections brilliantly. The gearbox is whip-crack quick to shift to deliver an almost imperceptible break in performance between gears, and the way the engine pushes you into the seat under hard acceleration is addictive.

However, speaking of the seats, this is the biggest complaint to be levelled at the car. Modern supercars are well-regarded for being so easy to drive and comfortable you could use them every day, but the seats in the Huracan Evo RWD are so uncomfortable that long journeys quickly came to be dreaded. The lumbar support on our optional ‘New Sport Seat’ was so aggressive I would get back pain not long after setting off, something I’ve never experienced before.

If there’s one thing Lamborghini understands, it’s how to design a head-turning car. It helped that our test model was wearing bright green Verde Selvans paint – a £9,540 option – but you couldn’t go anywhere without seeing passers-by having a look, many in open-mouthed delight.

Its low wedge design and sharp angles make it stand out even in the supercar segment, and this RWD version gets a few extra touches to differentiate it from other Huracans. For example, it has a new front splitter, larger front air intakes, a high gloss black rear bumper and a unique rear diffuser.

The cool, angular design continues on the inside. The instrument binnacle houses a cool digital display, while the centrally mounted touchscreen is a new 8.4-inch unit that controls pretty much all interior functions. As such, there are a lot of menus to navigate and it’s not the most intuitive system, so it will take some getting used to.

Otherwise, it’s not as cramped as you might expect when it comes to headroom and shoulder room between passengers. However, six-foot-plus drivers might find the driving position a little compromised, which doesn’t help comfort on long journeys.

As for storage, it’s unsurprisingly limited, but again, it might be better than you think. The front trunk easily swallowed a camera bag with room for another travel bag, while there are a few small cubby holes in the cabin.

The Huracan Evo RWD Coupe starts at £137,000 and for that, you get a decent amount of equipment, such as the drive mode selector, launch control function, heated and folding side mirrors and a 12.3-inch fully digital instrument cluster.

However, as with any luxury car, the price can be dramatically increased in the options list, with our car specified up to £185,500. On top of the aforementioned paint, choice options included 20-inch Narvi alloy wheels (£4,950), transparent engine cover with LEDs (£4,050), and a Sensonum sound system (£2,520).

Two surprising additions to the options list are DAB radio for £540 and smartphone integration for £2,440. Both should really be included as standard on a car this price…

The question we set out to answer at the start of this review was whether the entry-level Huracan Evo was the one to have. And honestly, for those who enjoy driving, it is. While some buyers will prefer the extra security that comes from all-wheel-drive, the rear-wheel-drive version has a sense of playfulness that its more expensive sibling is missing.

What’s more, Ferrari has always been the go-to supercar maker for the true driving enthusiast. With this Huracan Evo RWD, Lamborghini might have completely closed the gap.