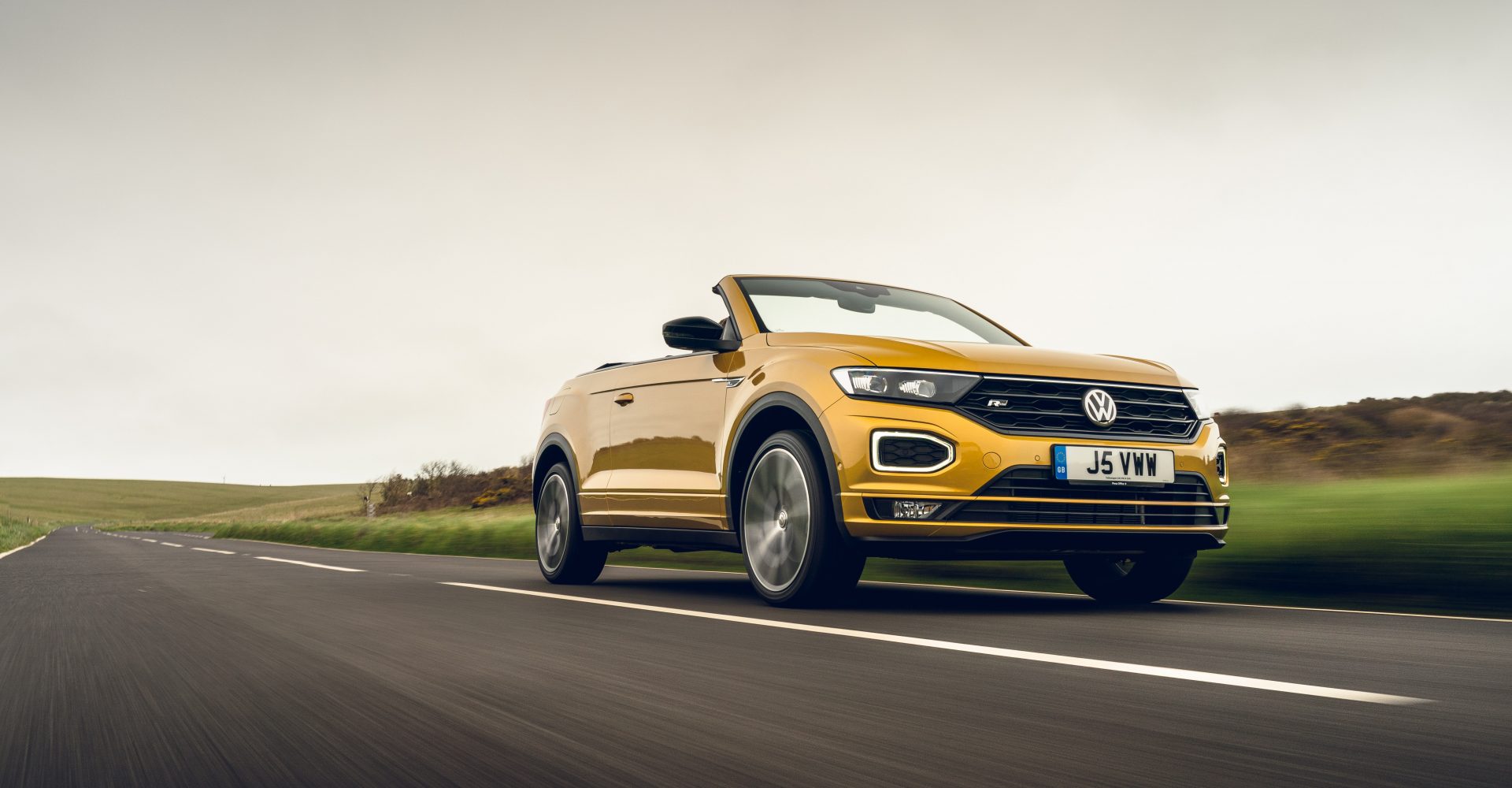 When Volkswagen first announced that it was making a convertible version of its T-Roc SUV, it’s fair to say that several sets of eyebrows were raised. After all, the market isn’t crying out for a raised-up four-seater with a drop-top roof, and the last one that was introduced – Range Rover’s Evoque Convertible – simply didn’t hit the mark with buyers.

But Volkswagen powered on, and here we have the all-new T-Roc Cabriolet. Should VW have left this car on the drawing board, or is it a genuinely attractive proposition? Let’s take a look.

Obviously the largest change going on here is, well, the fact that there’s no roof. For all intents and purposes this Cabriolet mirrors the standard T-Roc in all areas apart from that foldable fabric roof with the same looks and a similar – albeit slimmed-down – range of engines too. There, for now, is no convertible version of the tip-top T-Roc R – but we wouldn’t be surprised if this was introduced a little further down the line.

No, the biggest change here is the ability to expose the T-Roc’s cabin to the elements. The wheelbase has been slightly extended to give passengers a little more space while the roof is folded away, too.

Our test car makes use of a 1.5-litre turbocharged ‘EVO’ petrol engine, which sends power to the wheels via a six-speed manual gearbox. It produces a relatively modest 148bhp and 250Nm of torque, which is enough to whisk it up to 60mph from a dead stop in 9.3 seconds and onwards to a top speed of 127mph.

It’s enough performance for a car of this type, but another aspect of this car is economy – Volkswagen claims 42.2mpg combined while CO2 emissions are set at 130g/km. It should mean that you’ll be able to spend more time enjoying that roof-down experience than filling up.

Reading the power output figures for the T-Roc Cabriolet make one thing clear; this ain’t no performance car. Lopping the roof off comes with a weight penalty, with 190kg added by the roof mechanism and additional strengthening to bring the car’s total bulk to 1,540kg – that’s quite a lot for a car of this size.

But when it comes to sedately cruising around, these detriments make little difference. The T-Roc is best kept at a relatively meandering pace, where the soft ride and surprising lack of roof-down buffeting make it a comfortable place to be. Go a bit quicker and it does start to feel a touch unwieldy but, as we mentioned, this isn’t a car to break track records in. It’s for mooching about – and it does that just fine.

If there was ever a car you’d expect to not work visually, it would be a T-Roc with the roof removed. But somehow, it just does. Volkswagen has done well to give the exterior panels of the car some flair with cuts and ridges, and this helps it from looking too slab-sided.

When the roof is retracted it folds away neatly and doesn’t impede the main lines of the car, and when it’s up it’s not too bad either – though the back of the car looks a little fussy. In terms of looks, it’s at its best with the roof folded down, as is the case with most convertibles. Oh, and that roof takes just nine seconds to open and eleven seconds to close at speeds of up to 19mph.

Volkswagen has carried over the interior of the standard T-Roc to the cabin of the Convertible, which will mean it’ll be very familiar to anyone who has already experienced the firm’s compact SUV. It’s logically laid out and the materials are good on the whole, though some slightly scratchier plastics can be found lower down.

Space in the back remains quite tight and there’s a large penalty when it comes to boot space too. Though the capacity back there is the same regardless of whether the roof is up or down there’s just 284 litres of space on offer. You can extend it by lowering the rear seats, but the mechanism for the roof itself takes up a lot of room; it means you can stow longer items away, but they’ll need to be relatively slim.

Volkswagen has added a comprehensive list of standard equipment to the T-Roc Cabriolet’s line-up of features. Just two specifications are available – Design and R-Design – with our test car featuring the latter. It brings a full styling pack with chunkier front and rear bumpers, as well as 19-inch alloy wheels and lowered sports suspension.

When it comes to technology, there’s a full eight-inch infotainment system with satellite navigation and connectivity functions, as well as a 10.25-inch customisable drivers display which replaces the conventional dials. Adaptive cruise control, lane keep assist and predictive pedestrian protection are included as standard too, bolstering the T-Roc’s safety credentials.

There’s unlikely to be many people who cry foul of the T-Roc Cabriolet’s standard equipment, and with prices starting at just over £31,000 it seems a pretty reasonable amount of kit for the money.

The T-Roc Cabriolet is undoubtedly a way of Volkswagen filling a niche that many people weren’t aware existed. In truth, no one is calling out for this car, but it just happens to be quite an interesting prospect and one which is so far from the norm that it’s likely to be a hit with people who just, more than anything, want a change.

It’s comfortable, refined and – in a country that loves its convertibles more than any other – great with the roof down. The T-Roc Cabriolet shouldn’t work on paper but out on the road, it does.