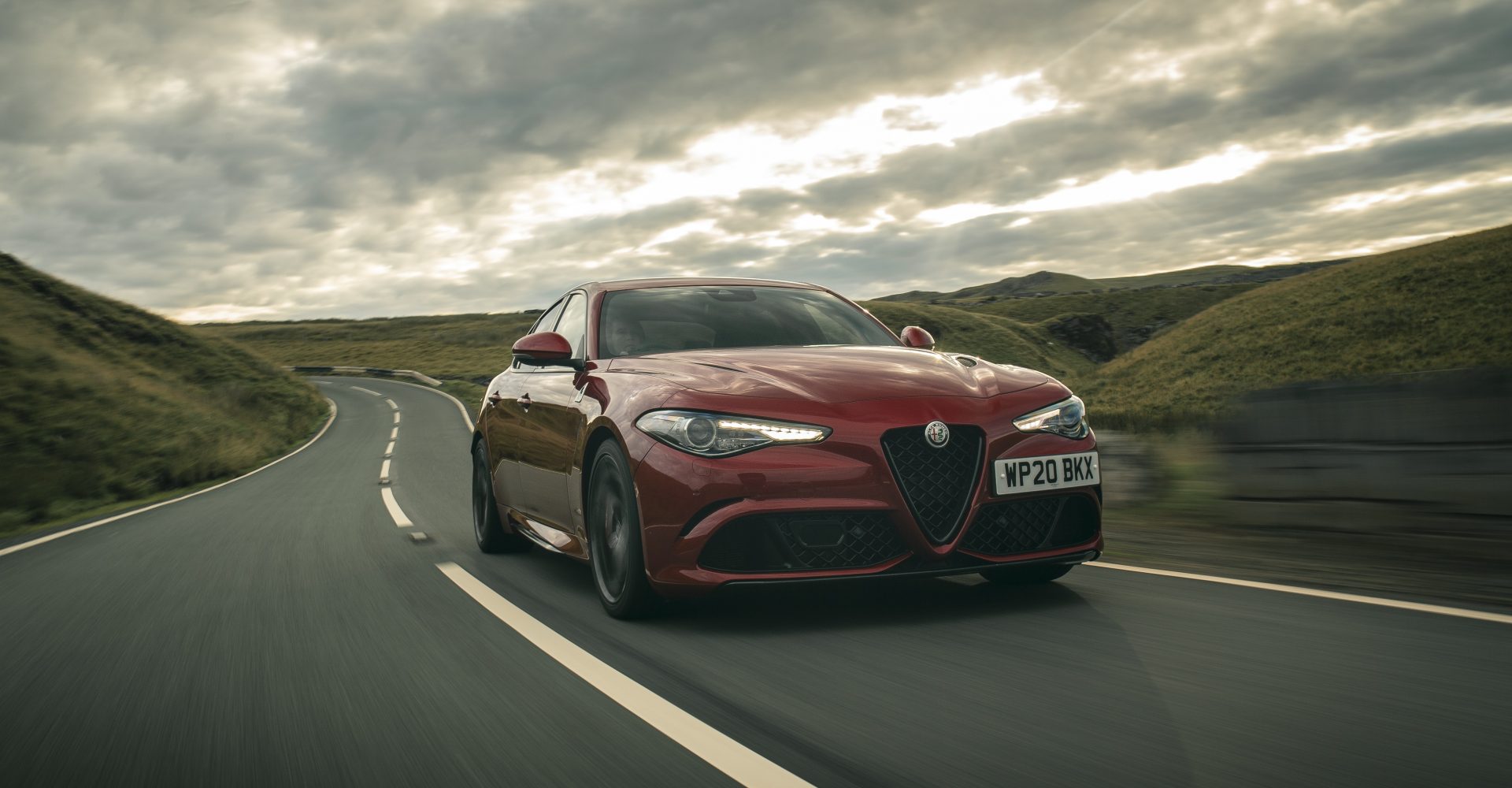 It’s fair to say that people have struggled to criticise the way the Alfa Romeo Giulia Quadrifoglio drives. No, this four-door saloon is easily one of the most dynamic, eclipsing and engaging ways of going from A to B, bettering more established German rivals in a segment they’ve dominated for decades. However, it’s also fair to say that the interior and technology levels haven’t been up to the same exacting standards. And plenty of people had a fair amount to say about that.

So Alfa Romeo has decided to do something about it. They’ve released this new, updated Giulia which aims to address some of the objections drivers had about the way it felt inside. Could this now mean it’s the complete package? We’ve been behind the wheel to find out.

It’s worth pointing out off the bat that mechanically, the Giulia QV has been left completely untampered with. You’ll find no slackening off in performance, no downgrading in engine size nor any revisions in suspension settings here. Alfa knows that this isn’t the area we’ve quibbled with in the past.

It’s in the cabin – along with some light exterior design changes – where things have been changed. Not only that, but the Italian firm has worked hard to improve the overall refinement so that it’s a little more calm and serene when you’re not exploiting all 503 horses under the bonnet.

But it’s those horses residing under the Giulia’s long, perforated front end that are key to the car’s appeal. The same 2.9-litre biturbo V6 sits resplendent in the engine bay, where as well as more than 500bhp you’ll find 900Nm of torque driven to the rear wheels through an eight-speed automatic gearbox operated some of the most glorious paddleshifters you’ll find on a car today. Zero to 60mph? That’ll take just 3.6 seconds, while flat-out the Giulia will call in the towel 10mph short of 200mph.

Emissions-wise, the Giulia QV has taken a bit of a hammering due to the recent more stringent WLTP testing cycle. It now produces 236g/km CO2 – rather than 206 under older NEDC testing – while economy has dipped too, falling to 27.2mpg from 31.7.

As we’ve already mentioned we had little argument with the way the QV drove, so given the lack of mechanical changes you’ll be unsurprised to hear that this latest refreshed version drives in just the same awe-inspiring manner. The steering remains direct and super-positive, while the throttle response and accompanying soundtrack you get under hard acceleration are excellent. The ability to slacken off the dampers during sportier modes is also a real plus in the UK, with a little more give in the ride allowing the Giulia to deal with the sometimes medieval-quality surfaces you find from time to time.

Our test car came with standard steel brakes which are predictable and provide a solid amount of braking force throughout the entire travel of the pedal. Carbon-ceramics are available as an option, but unless you’re planning on using your QV for a track day each weekend, we’d stick with the steels; they’re more progressive and a lot easier to manage during day-to-day driving.

In terms of styling updates, the new Giulia features smoked rear lights and blackened out badging, while a range of classic colours are now available for the exterior as a whole. Though in our opinion, the smoked lights disrupt the Giulia’s clean design slightly, it’s fair to say that it’s still a thoroughly head-turning saloon car and certainly one which stands out against the current crop of performance five-doors when it comes to design.

Around the back, you’ll find a standard quad exhaust system, though this can now be upgraded for a full Akrapovic setup which not only looks the business but also gives the QV an even more raucous soundtrack.

Now we get to the area where Alfa hopes to really push the Giulia forward, and it’s fair to say that it’s been reasonably successful. The old gearlever which featured a hard, plasticky edge is gone in favour of a much-smarter leather-wrapped unit, while a wireless charging area for your smartphone has been integrated into the area behind it. The steering wheel has been lightly redesigned too, while Alfa has also changed the glass used across the board to help reduce NVH – noise, vibration and harshness – in order to make the whole car quieter and easier to live with.

There are still some tackier plastics used here – the controls for the heating and ventilation, for instance – but largely these tweaks do well to make the cabin live up to the way the car drives. It still can’t quite compete with German rivals in the outright fit-and-finish department, but it’s a decent step forward.

Again, Alfa has taken on board some of the criticism levelled at the technology in the outgoing Giulia and tried to address it. The infotainment system, for instance, was slow and clunky on the older car, which is why this latest version receives an updated – and much sharper – setup. With customisable ‘widgets’, it’s got that smartphone-inspired design which is being used across the board at the moment, while the screen itself can be operated via touch rather than just through the rotary controller as before.

The small updates made to this latest Giulia Quadrifolgio really do help to complete the package. Whereas before the potent driving experience was watered down somewhat by the lacklustre interior, now it’s more a case where the cabin is able to come close to the quality felt through the wheel.

It’s still not perfect, mind you, but the changes made to the QV bring even more appeal to a car which, in truth, was still already exceptionally appealing.