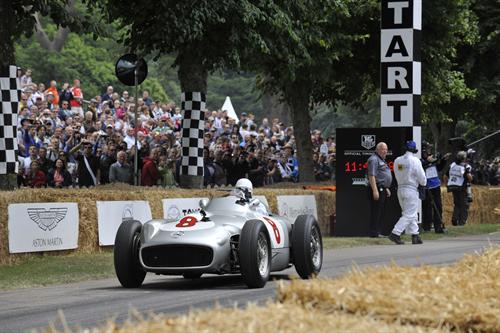 The Goodwood Festival of Speed is coming up this weekend and we are very, very excited.

Hundreds of supercars, highly modified motors and the stars of the motorsport world will be in attendance for all to gawp at. Just in case you’d forgotten how good the FoS is, here is a reminder of why it is a must-attend event for all petrol heads.

Usually seen on F1 race tracks (obviously), the Formula 1 cars make a speedy escape to Goodwood to show off their insane power ahead of the British Grand Prix. This year, Mercedes will be there along with driver Nico Rosberg who is taking on the hillclimb. Other famous drivers include Kimi Raikkonen and Felipe Massa.

If the supercars driving past aren’t doing it for you then no worries, crazy drift cars also slide around the hill climb throughout the day. Gymkhana legend Ken Block will also be making some black marks all over the track in a Focus RS and Mustang Hoonicorn. Mmmm smokey.

Bike lover? Consider yourself catered for. There are plenty of super and classic bikes charging around the track, competing against the cars. The Honda RC213V-S is set to make its UK debut there, which boasts 1,212 bhp per tonne. Oh, and Valentino Rossi is going to be there, no biggy.

Takes us back in time

Classic F1 and road cars get started up once a year and driven around the hay-barriered track giving everyone an idea of what sort of performance cars had back then. They’ll be lots of that action all weekend to enjoy while you get sunburnt.

There is a dirt track for the rally cars to show off their ability at the top of the hill climb. It’s a bit of a walk, but well worth it. This year highlights include Rauno Aaltonen who is being reunited with his 1964 Mini on the Forest Rally Stage.

Not a highlight for the driver, but watching a supercar crash into the hay makes us feel a little better about driving home in our boring everyday cars. Last year Chris Hoy stacked a GT-R and someone wrote off an Alfa Romeo 4C.

The Festival of Speed starts Thursday with the Moving Motor Show and then the event proper runs from Friday through until Sunday. Last time we checked tickets were sold out for Saturday and Sunday.

So if you missed out watch this video of highlights to make up for it.