The latest version of Microsoft’s best-selling racer is hitting the shelves tomorrow — and it’s a cracker!

Ultimate Edition owners have been playing the game since Friday (ourselves included) and a few unexpected discoveries have been made. So, here are five things you didn’t know about Forza Motorsport 7… 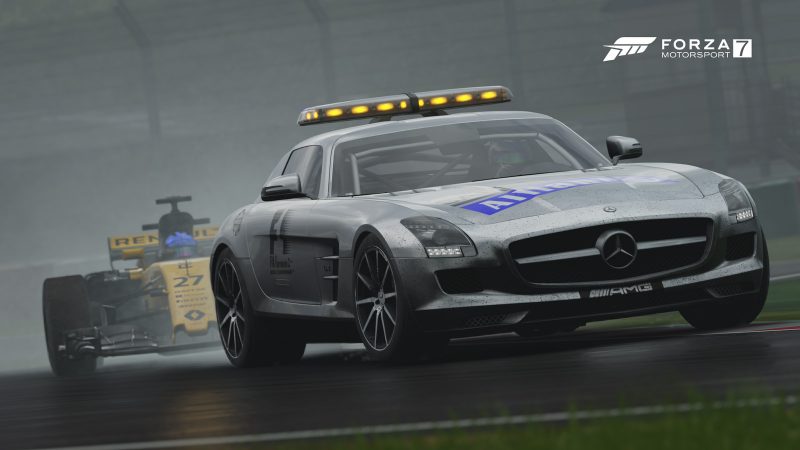 The Forza series has seen more and more cosmetic upgrades added over the past few games — with wide body kits, new wheels and fresh paint options recently included — and FM7 is no exception.

For the first time, safety car lights have been made available, just in case you want to parade the pack around rather than race them.

Need more things to spend your virtual credits on? Well, loot crates might just be your answer.

In these special crates, which come at varying costs, you can find exclusive racing suits, profile badges and cars. Think of them like a 2p machine that occasionally dispenses a McLaren F1.

If you’ve played an older Forza game, you’ll likely remember the auction house that allowed you to flog your unwanted machines to somebody else.

Well, it’s back in FM7 — and with more cars than ever, you’ll no doubt be thankful for it when duplicates rack up in your garage.

4. It’s not without a few glitches

New games these days are almost certain to have a few problems — and although Forza releases usually have very few, they do exist.

We’re pretty sure cars don’t get stuck like that in real life, and let’s not mention the AI crashes…

5. M Rossi returns and she’s as feisty as ever

My favourite thing about Forza 7 is that it finally reveals that M Rossi is a woman.

M Rossi. A feared name among Forza veterans as a hard racer with no mercy on the track.

Well, she’s back to feed on the cowardice of unworthy wannabe racers and you might just be next.

Think you’ve got what it takes to take her on? Forza Motorsport 7 is available from tomorrow for Xbox One and PC – or right now if you want the Ultimate Edition!