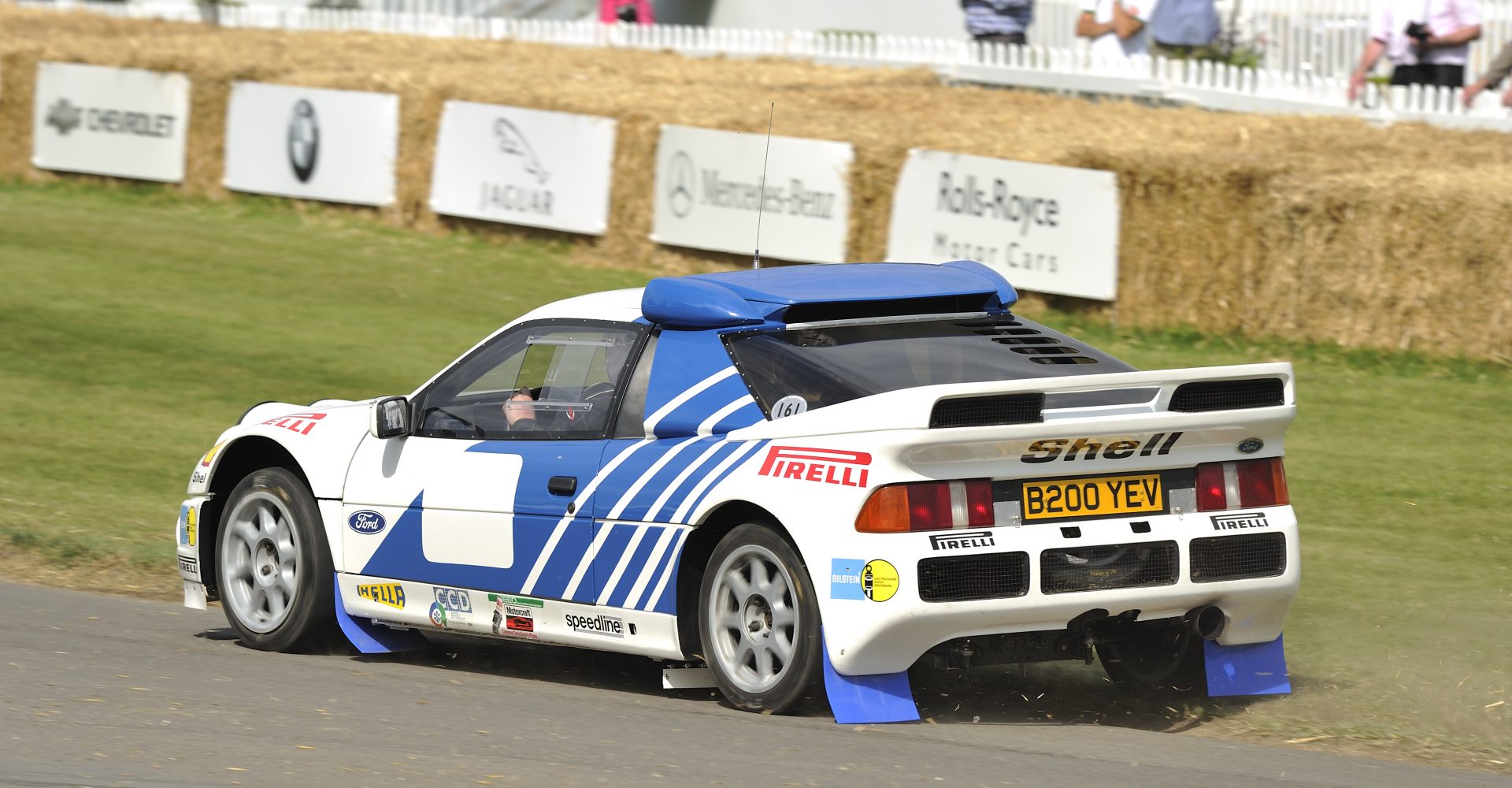 Over the years, Ford’s performance RS moniker has adorned some of the most iconic cars to have ever rolled off the production line.

Offering practicality as well as invigorating performance, RS cars have proved popular each and every time.

Here, we’ve looked at not just modern RS vehicles, but those that have gone down in history as standouts not just in the Ford brand, but in motoring generally. Here are 10 of the best. 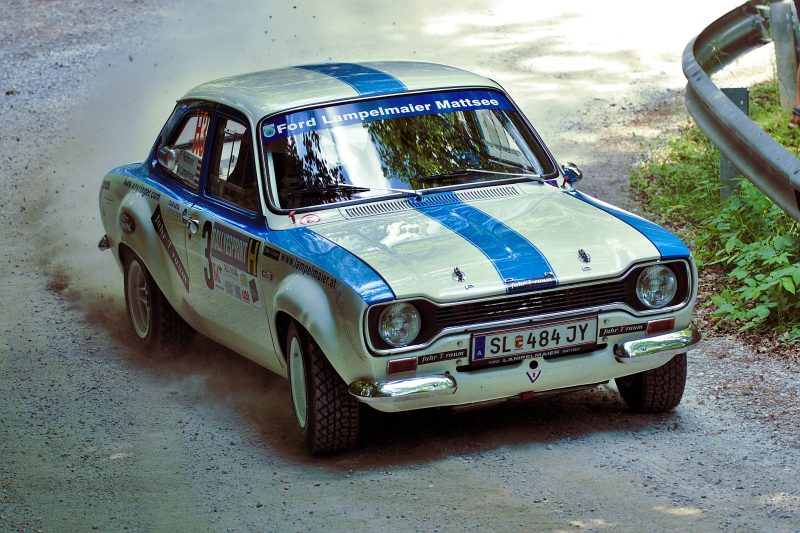 This was the RS that started it all. The RS1600 came before flared arches and aggressive styling came to denote go-faster models, but beneath its subdued exterior it was pure rally car.

It was the first car to use the Cosworth-tuned BDA engine, which would be ever-present in Ford’s rally cars for 16 years, eventually making more than 240bhp. It was an uncompromising lump, unrefined at low revs and low speed, but much like the stiff chassis and heavy steering, it would come alive when driven hard. 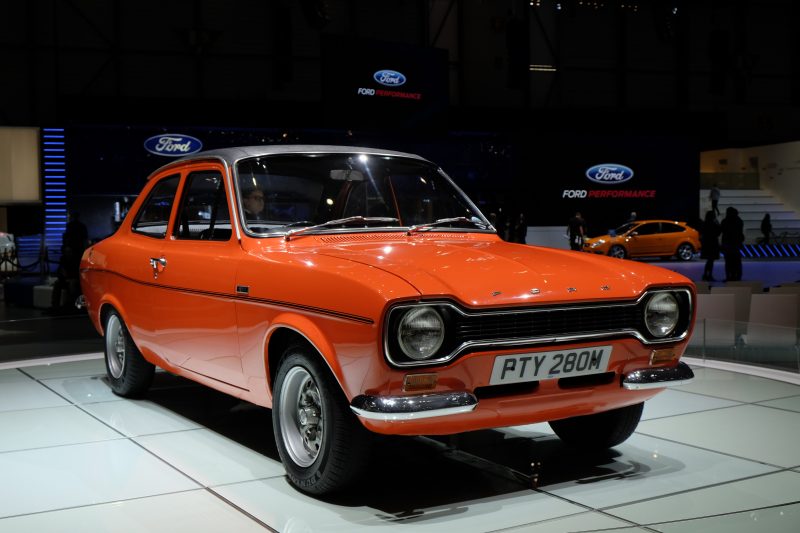 Following on from the success of the RS1600, Ford continued building rally-bred version of its everyday motors, and one of the most famous is the Mexico.

Built to celebrate the firm’s win in the 1970 London to Mexico World Cup Rally, it was essentially an RS1600 with the complex and sometimes unreliable Cosworth-tuned engine replaced by a 1.6-litre ‘Kent Crossflow’ unit. It made 86bhp and propelled the car from 0-60mph in 10.7 seconds and on to a top speed of 99mph.

Most examples have been used in professional and amateur rallying, so road-going examples are incredibly rare. Therefore, their value has shot up – an example is heading to Silverstone Auctions later this month with an estimate of up to £35,000. 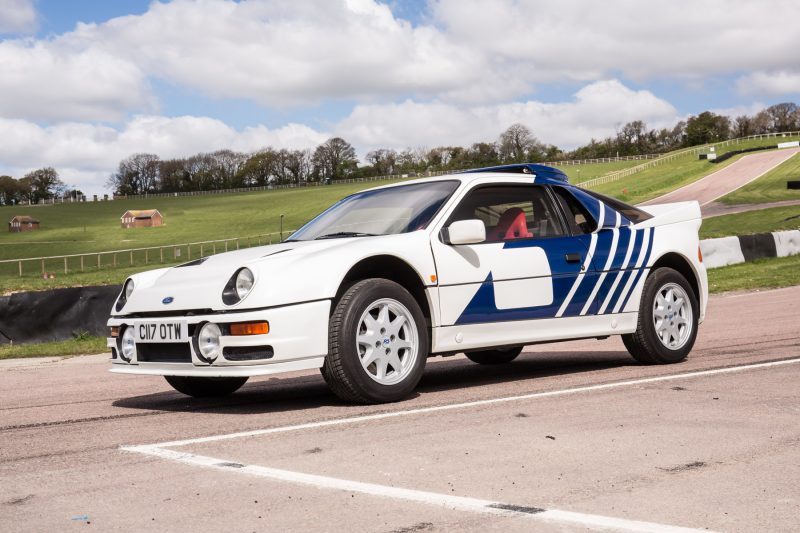 Some of the coolest cars ever made have come from the need to homologate vehicles for motorsport, when car makers have to build a certain number of models for it to be eligible to go racing.

The RS200 is a fantastic example of that. Ford wanted to dominate rallying, so it came up with a mid-engined, four-wheel-drive sports car to do just that for the 1984 Group B season. To make it eligible, it needed to sell 200 of them to the public.

Power came from a turbocharged 1.8-litre engine making 250bhp with a top speed of 142mph, with rally-spec models making between 350 and 450bhp. It could go from 0-60mph in five seconds flat, which is quick today, let alone over 30 years ago.

It wasn’t very competitive because of high turbo lag and a poor power-to-weight ratio, but Group B cars generally were too quick for their own good. After numerous fatalities the FIA banned the series, making the RS200 one of the rarest Fords out there.

The Ford Capri always had appealing sports car looks, but in the early days at least, it didn’t necessarily have the performance to go with it. Fortunately, the Blue Oval’s motorsport division fancied a Capri to go racing, and built a 2.6-litre-engined RS2600.

However, after initial success, BMW introduced the 3.0 CSL to touring car racing, so to keep pace Ford had to up its game with the Capri. Enter the RS3100, which boasted a Cosworth-tuned 3.1-litre V6 making 148bhp. It could go from 0-60mph in 7.6 seconds and a top speed of 125mph. It also received uprated suspension, a sportier body kit and subtle aerodynamic features. Just 248 were built.

They’re highly desirable now – an excellent example sold at Silverstone Auctions in 2016 for a whopping £51,750. 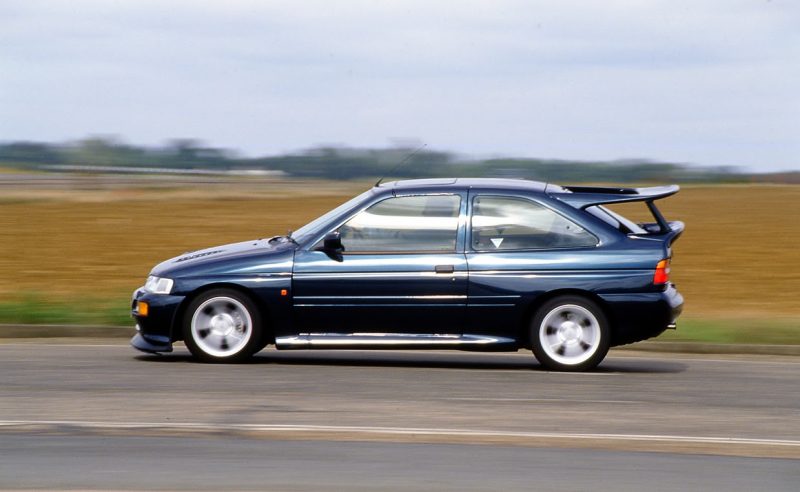 The Escort RS Cosworth was the result of a partnership between Ford and automotive engineering company Cosworth. What that partnership created became widely regarded as one of the best-handling Ford RS cars ever.

Under the bonnet sits a 222bhp 2.0-litre turbocharged engine, with permanent four-wheel-drive resulting in excellent grip – it could accelerate from 0-60mph in 5.8 seconds, making it as fast as a contemporary Ferrari, while the top speed was 147mph.

It was introduced to win World Rally Championships for Ford, and while it failed to do that, it did get 10 stage wins across Group A and WRC.

Just over 7,000 cars were produced between 1992 and 1996, making it extremely rare and, nowadays, particularly sought-after. Decent examples now command in excess of £30,000, with many hitting the £50,000 mark – showing just how in-demand this classic is.

Few car names generate as much excitement as Sierra RS Cosworth. Capable of hitting 60mph in 6.5 seconds and achieving a top speed of 149mph, the Sierra RS Cosworth was seriously quick, and thanks to a large rear spoiler as well as a range of exterior enhancements it was stable at high speed too.

Under the aggressively vented bonett sat a 2.0-litre engine with a turbocharger and fuel injection pushing power to 201bhp. Zero to 60mph took 6.2 seconds and the top speed was 143mph.

Modifications to the standard car included suspension and aerodynamics derived from the American Merkur XR4Ti race car. The large rear wing, installed following wind tunnel and high speed testing, received resistance from Ford management, but the designer insisted it stay. It’s now one of the most iconic modifications in automotive history. 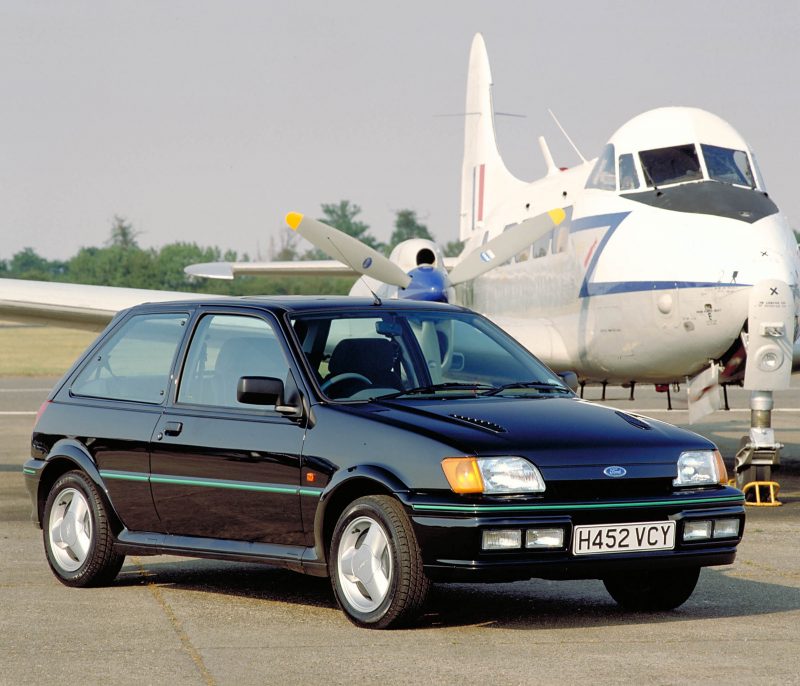 Ford’s hugely popular little hatchback has been largely neglected by Ford’s RS engineers over the years, despite being incredibly successful in ST guise and earlier XR2 models. However, between 1990 and 1992, Ford built an RS Turbo.

It was incredibly quick for such a small car – the tuned 1.6-litre engine made 132bhp, and thanks too to the lightweight frame, it was capable of hitting 60mph in 7.9 seconds before topping out at 133mph.

It was relatively well received at the time, but overshadowed by the iconic Peugeot 205 GTI, despite that car being long in the tooth by the time the RS came along. Long-term ownership was also beset by rust issues, with the sunroof draining into the body kit not helping matters.

It was replaced by the RS1800, which used a non-turbo 1.8-litre engine shared with the Escort XR3i, making 129bhp. Zero to 60mph came up in 8.3 seconds and the top speed was 123mph. The RS Turbo is more fondly remembered thanks to its punchy turbo engine offering better performance, but the naturally aspirated 1.8-litre unit offered smoother response. 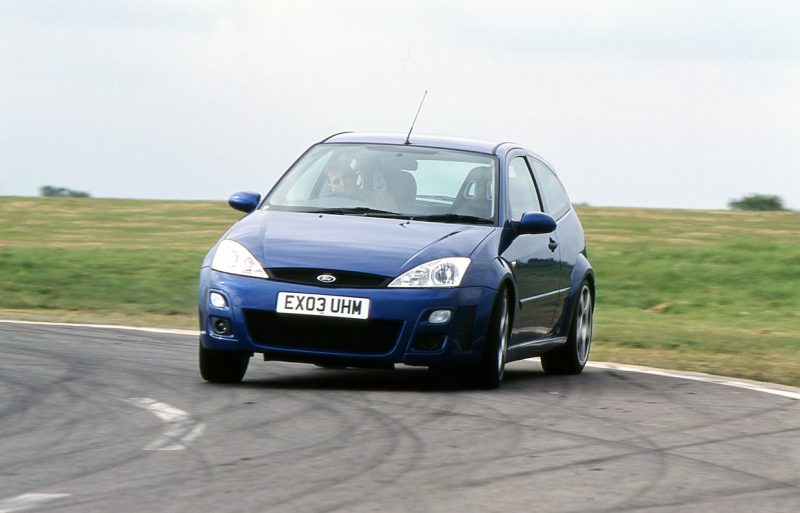 The Ford Focus RS skilfully blended everyday usability, hatchback practicality and heightened performance in a package that didn’t look all that different to a regular Focus.

Powered by a turbocharged 2.0-litre engine making 212bhp, and the Ford Focus RS could hit 60mph in 5.9 seconds before going on to 144mph.

It featured a number of aftermarket upgrades, including lightweight OZ Racing alloy wheels and Sparco bucket seats. Meanwhile, Ford developed new ‘RevoKnuckle’ suspension technology to reduce torque steer, with the result being that the motoring press hailed it as one of the best handling cars on the market.

The second-generation Ford Focus RS came with flared arches, a rorty exhaust and a prominent rear wing – but that wasn’t extreme enough for Ford. The company released an upgraded version, which was limited to 500 units, of which just 101 came to the UK.

Upgrades by Mountune pushed power from 300bhp to 345bhp thanks to a larger intercooler, a larger air filter, larger exhaust downpipe, uprated fuel pump and updated software. Comically, the Focus retained its front-wheel-drive set-up, making it quite a handful.

It was so popular it had sold out before even being officially revealed to the public, despite the eye-watering £35,000 price tag. 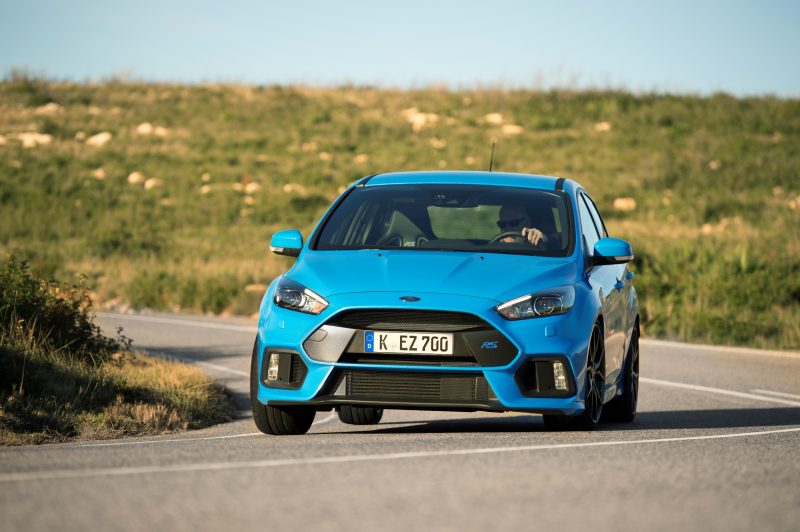 The second-generation Ford Focus RS brought with it an all-new, all-wheel-drive system. Combined with a turbocharged 2.3-litre engine shared with the Mustang, the RS was hugely capable in all conditions and even featured a ‘drift mode’, allowing drivers to use the car’s systems to ‘drift’ around corners.

The clever rear-biased all-wheel-drive system gives the car a unique character for a hot hatch, with most models using a front-wheel-drive set-up.

Featuring slightly more subdued styling than previous models, it makes 345bhp – 39bhp than this engine does in the pony car – and can hit 60mph in 4.5 seconds before topping out at 165mph.