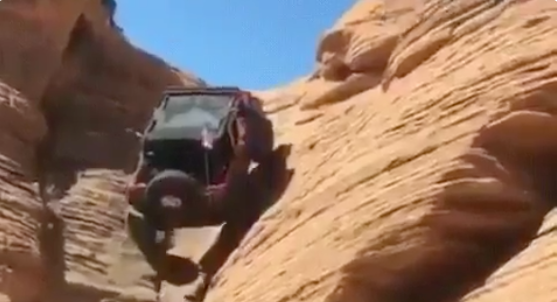 Jeeps are famed for their off-road abilities.

Whether it be conquering muddy hills or scrambling over rocks, the 4x4s are generally pretty tough.

However, weighing in at well over 1.8 tons, the heavily-modded Wrangler isn’t exactly a model known for its gravity-defying abilities. At least that’s what we thought…

This clip appears to prove otherwise, showing the heavy all-terrain vehicle scrambling up an almost-vertical rock face with the sure-footedness of a mountain goat.

The feat was caught on camera in Tierra Del Sol, Malibu, by Motorz presenter Chris Duke. While impressive, note how the footage stops just as the Jeep reaches the crest, leaving us to wonder whether it succeeds or just rolls back down…