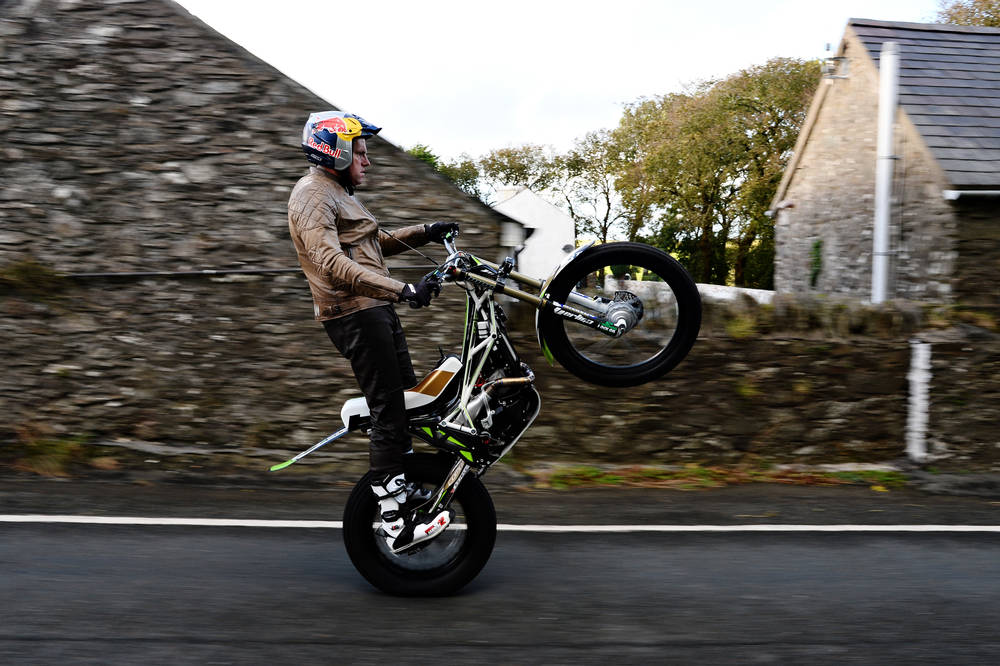 It’s usually speed records that are set by motorcyclists on the Isle of Man. However, stunt rider Dougie Lampkin took a different approach…

The professional trials and enduro rider made history at the weekend by becoming the first rider to lap the famous island on just one wheel.

With an average speed of just 24mph – almost six times slower than John McGuinness’s record lap of 131.57mph – Lampkin took one hour and 37-minutes to complete the feat, after setting off from the famous Grandstand start line at 5pm on Sunday.

Having been forced to postpone the challenge for 24 hours because of 55mph gale-force winds, he battled to stay upright in 40mph gusts on the notorious Mountain Section.

Speaking after crossing the finishing line, the 12-time world champion trials rider said: ‘Up to 10 times I came close to dropping and I thought I’d lost it twice.  When you’ve lost your balance and your right leg comes off, you’re in massive trouble.  I couldn’t rely on the rear brake at that speed.’

He added: ‘I feel absolute massive relief. The build-up to it, seven months of planning, everything that’s gone on like the nightmare with the weather yesterday and still strong winds today on top of the mountain, I was just hanging on really. It wasn’t over until a couple of metres from the end but that last couple of metres was just amazing.’