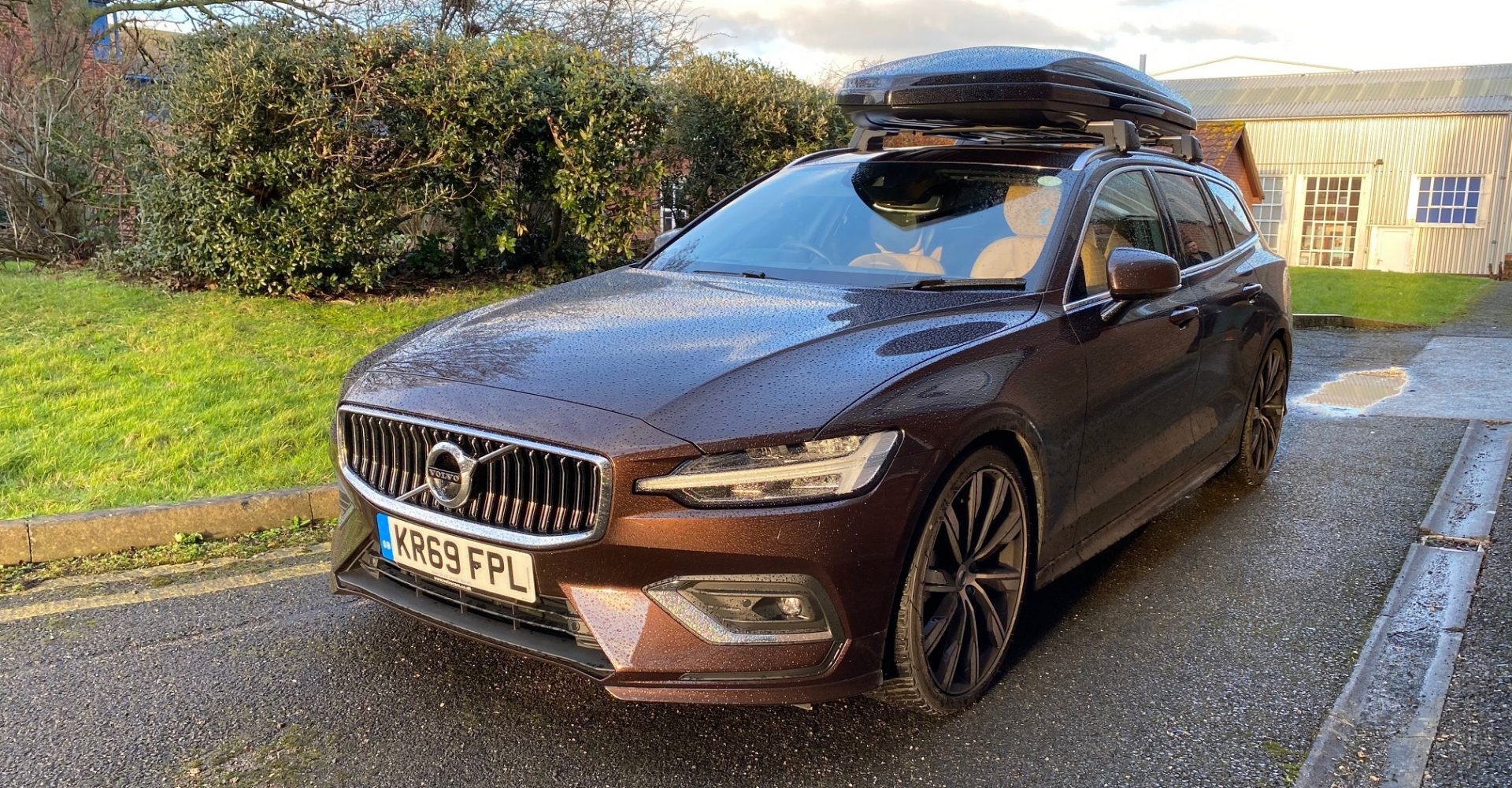 If you’ve failed to spot Volvo’s move away from grandfather-clock-shuffling estate-mobiles to modern man’s classy alternative to German bore boxes then you’ve probably been hiding under some Ikea furniture.

Volvo’s departure from fuddy duddy to cool kid has been facilitated largely thanks to some stonking new designs that have added smart lines, chiselled chins and brilliantly usable interiors to a brand that desperately needed a fresh injection of life.

The Swedish firm, thanks to Chinese owner Geely, has been allowed to mature into a fashionable marque whose appeal has stretched far wider than the bowls club set.

First came the refreshed SUVs that sold like those hot dogs you get at the end of a furniture store supermarket sweep. Now the brand has moved on to refreshing its heartland – models such as the mid-range S60 saloon and V60 estate – and it’s the latter we have on long-term test here.

Needless to say, I’m a big Volvo fan, so choosing the specification of this long-termer was quite a joy. The brown on Angel Delight brown colour scheme I opted for isn’t to everyone’s tastes. It’s been cruelly described by some as a ‘coffee shop disaster’, while others have labelled it a masterpiece. Naturally, I agree with the latter. I think the Maple Brown paint works a treat and the sand-coloured leather seats have a hint of stately home luxury about them.

The Inscription Plus is an impressive specification. I opted for slightly larger wheels, which make the ride a little on the hard side, but it’s not unbearable, and importantly they look superb. Couple these with the stylish headlights and sporty trim and the V60 becomes even more of a handsome machine.

At not shy of 2,5000 miles into my tenure with the Volvo, this first report is a little late arriving, but that’s mostly because there have been a few teething troubles with KR69 FPL.

The first transpired on the day it arrived – a ‘Blind Spot Warning’ light illuminated intermittently on the dash. I gave it a few hundred miles to see if it disappeared but it didn’t. Instead of a trip to a local dealer, Volvo wanted to take the car back themselves to check it over and their technicians completely reset the software. This worked, but only temporarily, the fault appearing on the dash again a few days later.

Back the Volvo went for further investigation, and after two weeks in the hands of the firm’s top mechanics the fault was solved. They didn’t tell me exactly what it was, but needless to say it caused them a headache, if I can read anything into their frustrated emails.

On the plus side, I used the two return trips as an excuse to try out some accessories for the V60. The first time it came back with a roof rack and three bike-holders for a short break to Center Parcs. The official accessories worked brilliantly and kept the bikes securely locked in place, which meant I didn’t have to worry about leaving them during my many, many trips to service stations on the way.

The second time, the V60 returned with a smart roof box for my annual ski trip to the Alps. I’ll be driving down with my daughter in a few weeks, and although the boot space with the seats down has plenty of room for a snowboard, supplies and three suitcases full of cuddly toys that will be ‘vital’ for the trip to the slopes, I fancied a bit of extra storage space.

The official top box fits beautifully and looks good too – even if it does give the Volvo a whiff of Donald Trump’s quiff about it from a side view.

I’ll mention the other niggles while we’re here too. The keyless entry doors have an annoying habit of not working all the time, normally when I’ve got my hands full of shopping and/or it’s raining. It’s frustratingly intermittent but happens often enough for the Volvo to have learnt some colourful expletives.

The Apple CarPlay doesn’t always connect either, and I’ve found the only way of solving it is the IT expert’s favourite solution of turning it off and on again. What’s more, a particularly hyperactive friend of mine sat in the back recently and extended the seatbelt to its uppermost limits (no, I don’t know why either) and it got stuck there for a day or so until I told him to work out how to fix it. He read the handbook and eventually found a lever that reset it.

And while I’m on the subject of seatbelts, the car’s propensity for safety is a little over the top on occasion, like when my daughter decides to jump into the front after we’ve dropped someone off. If she doesn’t get out of the door and instead climbs through the middle (as kids do), the car thinks she’s taken off her belt and is still sitting in the back, resulting in the alarm bonging until I stop and plug the belt in.

Anyway, despite all this, I love the Volvo. Having stepped out of an electric BMW i3 that I ran as my previous long-termer, I admit the swap back to a noisier diesel engine was quite a shock. When you’ve got used to silent motoring, even whisper-quiet combustion engines sound loud.

The D4 in the V60 is a little on the louder side, but its 560-mile range between fill-ups is a joy. I’m averaging around 38mpg, which isn’t great, but then most of my driving is around town, where diesels aren’t at their most efficient.

Despite the bigger wheels, I’ve found the ride pretty good and it’s plenty fast enough. The automatic gearbox hasn’t been ruined like in most new German models, but there is still a lag when you put your foot down. It’s not nearly as bad as the last Audi I tried, though, which was frankly undriveable, verging on dangerous, but there’s still a noticeable delay that you have to plan around when exiting junctions or entering roundabouts.

Next up is the trip across France. I’m hoping that those comfy seats and huge fuel tank will really come into their own on the 1,200-mile round trip. I’ll report back with snowy pictures and a full report soon.