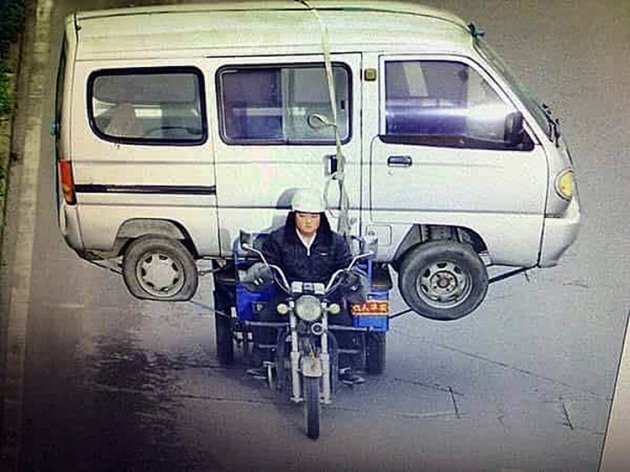 EVER seen a car with a mattress strapped to the roof, or maybe an old bed or wardrobe poking out the back?

Chances are we’ve all witnessed similar examples of vehicles being overloaded like that – but this guy in China took things to a whole new level.

CCTV in Jiangsu Province caught this rider of a three-wheeled motorbike merrily making his way to a scrapyard – with, as you can see, a knackered old minivan strapped to the back.

The vehicle, weighing in at a tonne, was attached to the unnamed motorcyclist’s three-wheeled bike with belts.

Police stopped him as he negotiated the streets of Zhenjiang, on the south bank of the Yangtze River.

Force spokesman Wei Lei told Yahoo News: “The man said the minivan had already been decommissioned and was on its way to the scrapyard. But officers gave him a stern warning and called for a tow truck to carry it the rest of its journey.”

The officer added the trike rider had “greatly exceeded” the weight limit for his vehicle, which is around 150kg. Just a bit!