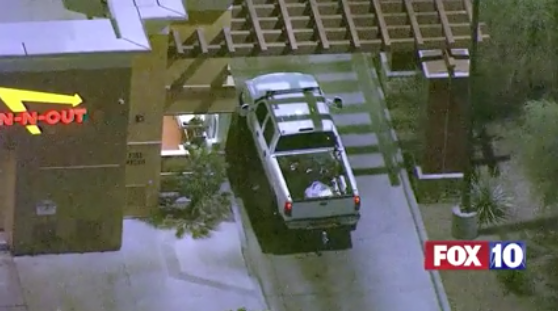 Fast food is something many of us guiltily enjoy, but in some circumstances it can wait, right? Well, not for one particular suspect being chased by police in Arizona…

Phoenix Police have made public some bewildering and amazing aerial footage of the force in pursuit of a perpetrator in a white pick-up truck.

The driver seems to think it’s OK to pull over and head for an In-N-Out Burger drive-through – not as a shortcut to escape the cops but, quite simply, to order some food. Perhaps he was just trying to get in on the recent craze of chicken nuggets that’s flooding social media.

The suspect then gets his food and continues to flee. Maybe his hunger blinded him from the fact that he was being pursued by police, or maybe being chased by them is hungry work – we’re not ones to know.

You can watch the bizarre scenario unfold below: