Some of us here at SuperUnleaded Towers got very excited indeed when the Transport Accident Commission in Australia unveiled its latest bid to cut road deaths and injuries.

It’s an important issue, of course, and we’re in awe of the work that went into creating ‘Graham’ – an interactive, lifelike sculpture showing how a human would have to evolve to withstand the forces created by crashes, either as a passenger or a pedestrian. 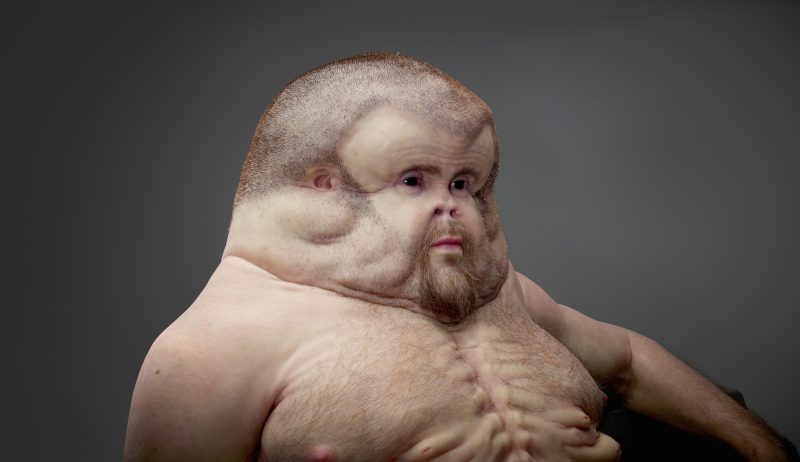 Dreamt up by Melbourne sculptor Patricia Piccinini for the awareness campaign, it’s got a massive chest, no neck, extra nipples and a pumped-up head. The chest and nipples act like airbags, while the flattened face protects the ears and nose, the absence of a neck means no whiplash or broken bones, and Graham’s thick skin gives him extra all-round protection.

Terrific stuff and all very clever – if a bit hideous.

But a few of us here who also have a penchant for TV sci-fi couldn’t help noticing that Graham bears more than a passing resemblance to a monster that featured in Doctor Who back in 2006. (In the episode Love & Monsters, since you ask.)

Yes, that’s Peter Kay in the sumo wrestler-type suit there, portraying the Abzorbaloff – a creature that, well, absorbed people who crossed its path. (Or ran into it, if you will.)

Seems the show was well ahead of its time there. How appropriate!

Here’s the commission’s video with all the clever science stuff about Graham:

And, er, here’s a BBC video featuring the Abzorbaloff:

Why, it’s almost as if they were brothers!

Seriously though, we hope Graham succeeds in his mission to act as a reminder about how vulnerable the human body is, because – as the commission says – cars have evolved a lot faster than we humans have.