Unfortunately, one truck driver obviously didn’t receive the message and came incredibly close to causing a fatal collision after his HGV overturned, spilling bales of hay all over the road in front of an oncoming lorry.

Dashcam footage shows the silver truck come screaming round a corner on the A17 near Newark, Nottinghamshire, across from a Mid UK Recycling lorry. The hay bales are already leaning precariously and reach the point of no return, tipping off the trailer into the road in front of the lorry.

Luckily, no one was injured in the accident, which happened at rush hour on Tuesday morning, although damage was caused to both vehicles. The hay-carrying lorry ended up leaning against the hapless Mid UK Recycling truck. Police were called to the scene and closed the road while it was cleared, which caused massive delays.

Another hay-carrying lorry can be seen behind the offending HGV. We wonder what that driver was thinking! 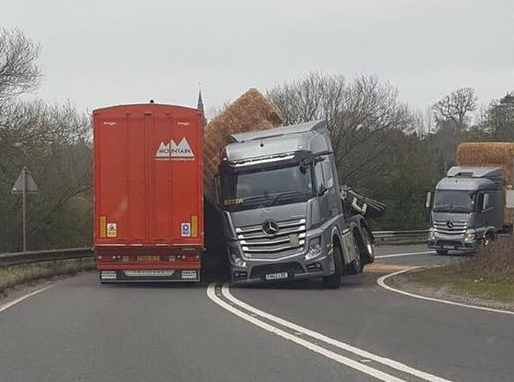 Thankfully, there were no injuries, but it was very fortunate. Had it been a car, rather than one of our lorries, we would almost certainly be talking about a fatality.

Check out the heart-stopping footage below.