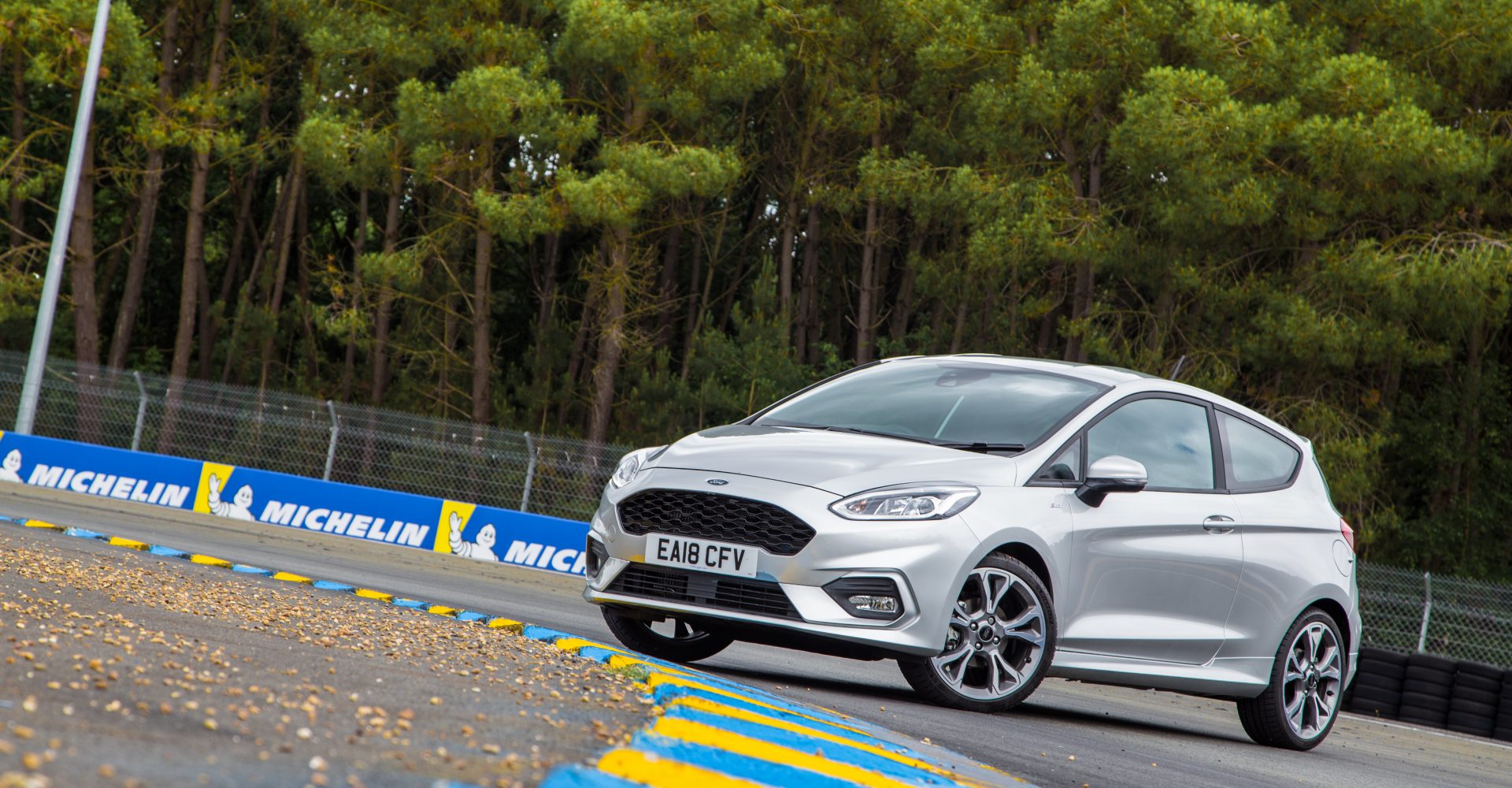 As bucket-list road trips go, I think it’s fair to say that not many people would have ‘drive through northern France’ up there as an item to check off.

I’m as guilty as anyone for this – as far as I’ve been concerned, anything between Calais and Paris exists only to be driven past on the way to somewhere prettier, or warmer, or more cosmopolitan.

I reckon it’s about time someone gave the likes of Picardy and Normandy a chance though, and so it’s with this in mind that I find myself 10 miles east of Boulogne, crawling through a tiny French village in the middle of some bizarre rural rush-hour traffic jam.

My destination – eventually – is Le Mans: home of the world famous 24-hour endurance race that bears its name, and soon to be teeming with tens of thousands of fans that make the trek every year.

A surprising majority of those are Brits, heading across the channel in droves every summer to watch the race, soak up the atmosphere and – largely, it seems – consume as much cabernet sauvignon as the local Carrefour can supply.

More surprising still is the sheer diversity of the cars they’ve chosen for the trip. Anything from 1960s Lotuses and Triumphs to brand new Ferraris and Lamborghinis get brought along for the ride, and as a result the Autoroutes from Calais and Le Havre can feel like a moving motor show of their own at times.

As for me, I’ve chosen something a little more down to earth for the trip: Ford’s latest Fiesta, launched to some fanfare last year. My reasoning is simple: I want to see how Britain’s best- selling car holds up to a road trip of this magnitude. Just 20 years ago the thought of taking a Fiesta all this way would’ve raised a few eyebrows, but since then Ford’s second-smallest car has morphed into a bigger, comfier creature altogether. 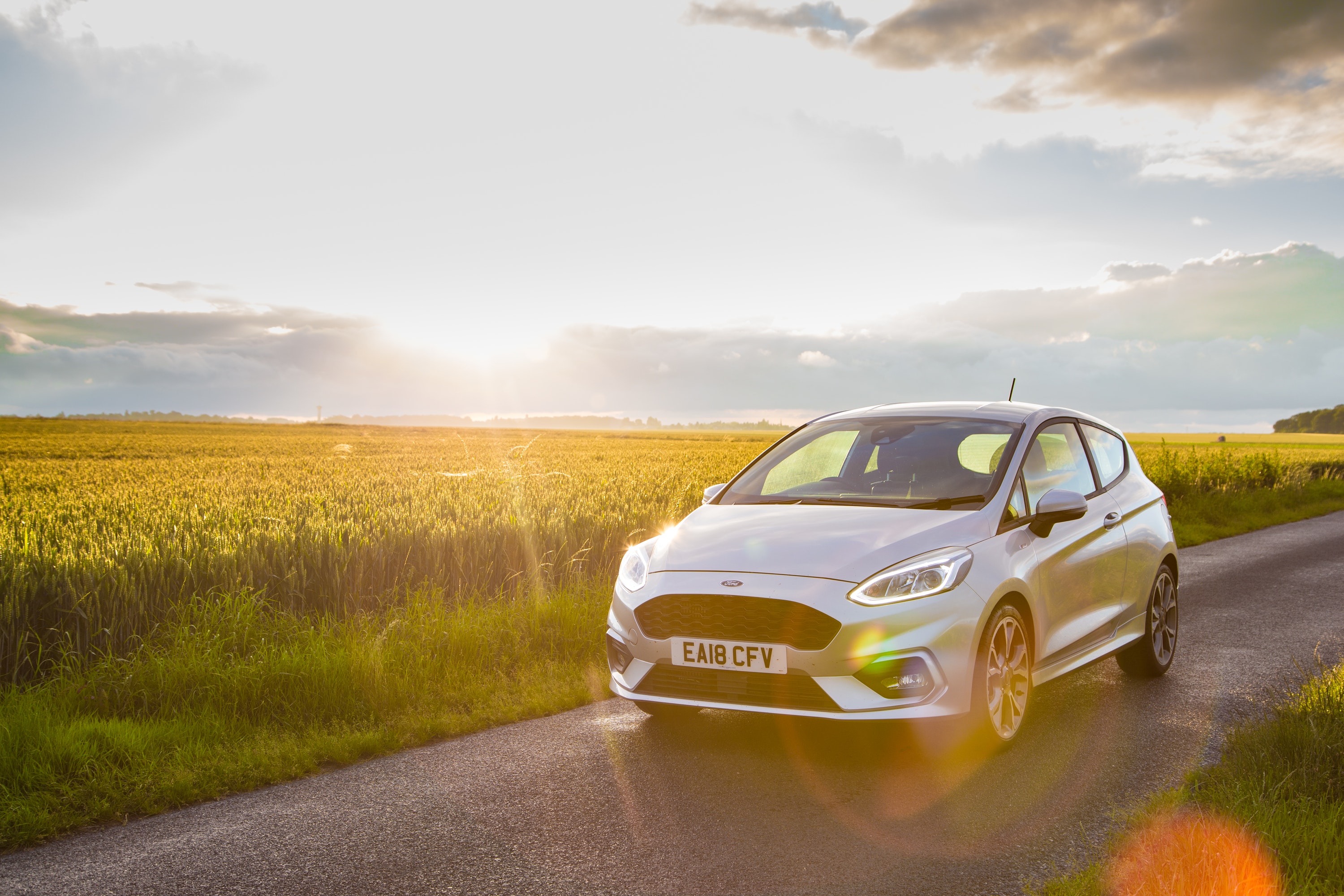 Anyway, back to my route. Perhaps a little foolishly, I’ve thrown caution to the wind and ticked the ‘avoid toll roads’ option on the Fiesta’s navigation – hoping that I’d end up seeing a bit more ‘real France’ on my route, rather than tripping over fellow tourists at motorway service stations.

So far, the plan is working: I’ve not seen a British numberplate since Calais, and traffic jam or not, at least the surroundings aren’t bad. Pretty stone-built gîtes, a boulangerie straight from the front of a French text book, locals dozily chatting to each other under a hanging basket; I’m suddenly aware of how out of place my ST-Line and its Southend-on-Sea bodykit must seem.

Still, I think it looks pretty good – there are just enough sporty bits without appearing like a total ST wannabe. It’s much better proportioned than the last Fiesta too: more squat and purposeful than before, and now without the look of a tall car on tiny alloys.

Before too long I’m back in open country – and I mean open. When you live in the UK, and particularly the south of England, it’s easy to forget what wide open spaces actually feel like. Drive for an hour in even the most rural of areas and, eventually, you’ll find a retail park, or a new housing development, or a National Trust castle with adjoining tea room. 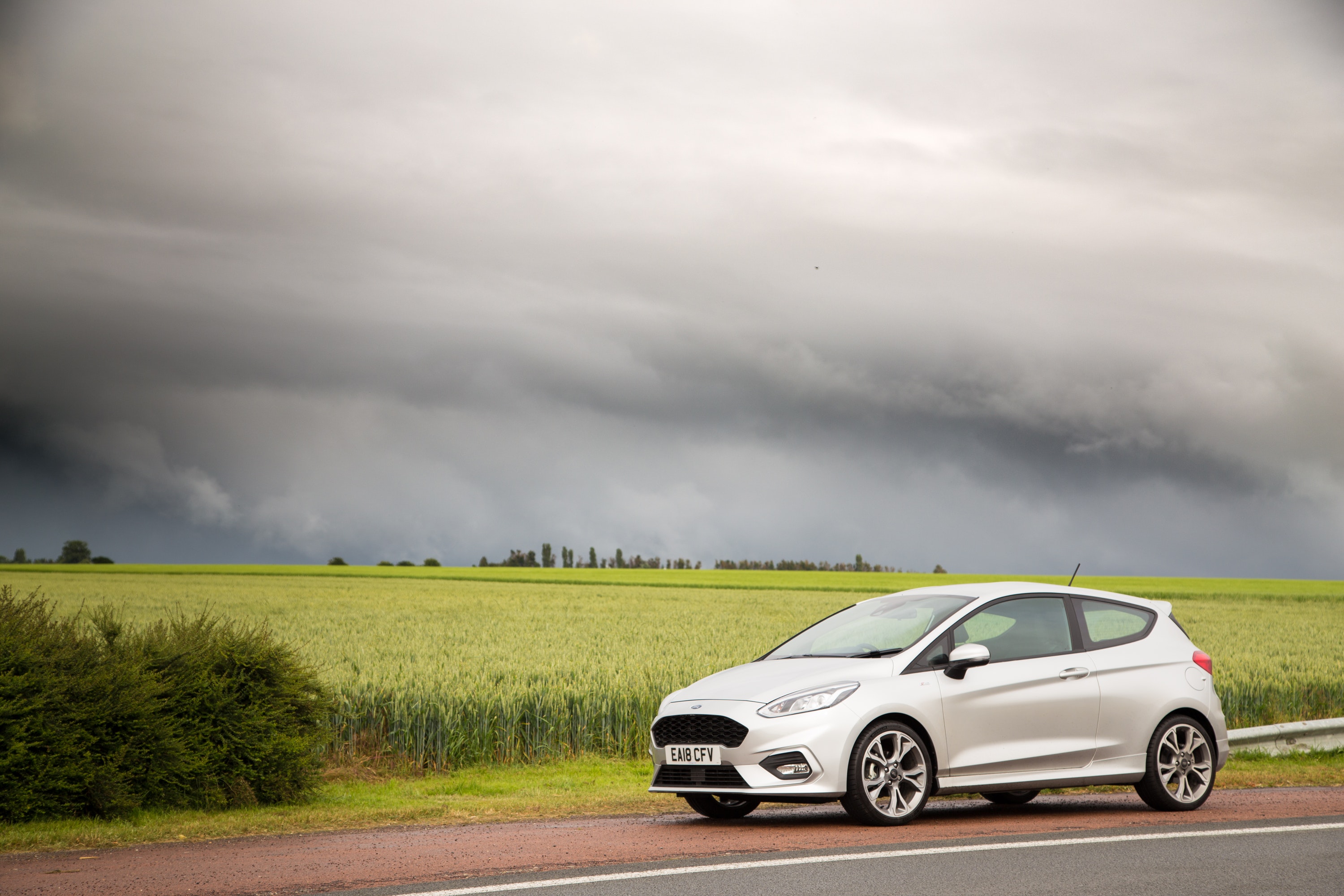 Clearly the people of this particular bit of France, which I’m going to call the Brioche Basket, didn’t get that memo. After mile upon mile of wheat fields interrupted only by the occasional grain silo, I begin to feel like I’m not in France at all, but some agricultural mid-western US state. If the tornado from the Wizard of Oz dropped Dorothy and Toto here, they probably wouldn’t realise they’d left Kansas.

Speaking of scary weather, the brooding clouds on the horizon – however far away that actually is when the scenery is this flat – are doing little to convince me I’ve got a pleasant journey ahead. But press on I must, and bizarrely I’m soon met with even more Route 66 vibes.

First it’s an unashamedly American roadside diner – or at least, what’s left of one: now just a lonely neon sign in the middle of some fenced-off waste ground.

A few miles later, it’s the caricature of a ‘60s Mustang on the sign of an otherwise ordinary used car lot that has me musing; not least because there’s nothing even close to any Detroit metal nestled among its selection of Renault Meganes.

Realising neither of these is much good for a photo stop, I do pull in when I spot Americanism number three: a motel – complete with its very own fighter jet, of all things. For all that the French like to pretend they hate the US of A, there’s an awful lot of Americana floating around in their countryside… 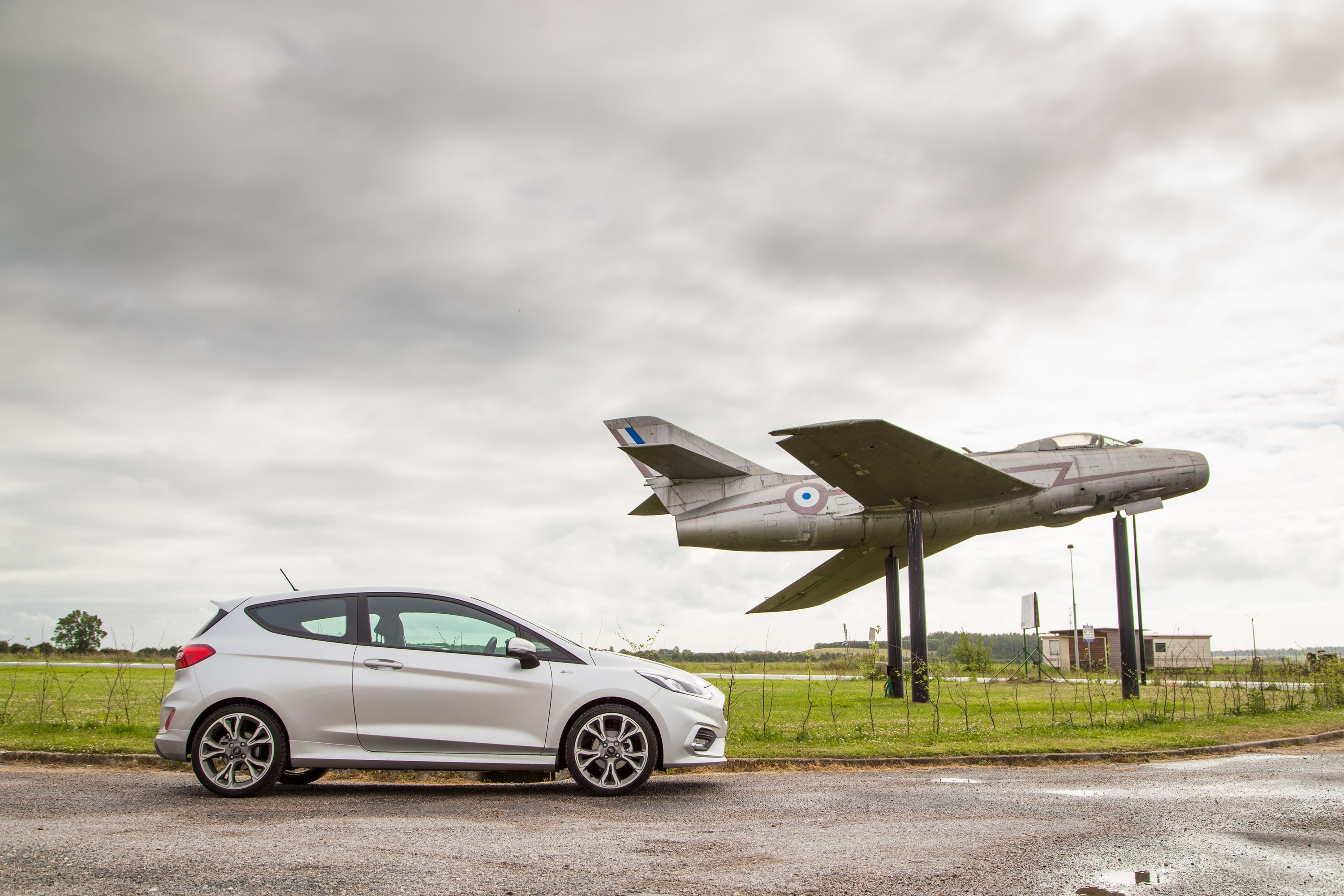 Back on the road again, it seems like days before I’m even half way to Le Mans. Yet more wheat fields, yet more 80km/h roads, barely any sign of civilisation. Thankfully the Fiesta is proving to be an excellent companion, even on these snore-inducing stretches of tarmac.

The ST-Line’s body-hugging sports seats are surprisingly supportive, and despite the optional 18-inch alloys of our car, it rides well too.

It’s the Fiesta’s optional B&O play sound system that’s really keeping me sane, though. A £350 option on our car, it’s well worth the extra cash and sounds far better than the stereo in a Ford Fiesta has any right to.

With an hour to go, France finally delivers a set of curves where I can really stretch the Fiesta’s legs. A road closure forces me onto the equivalent of a British B-road and, now a little impatient for dinner and bed, I give the ST-Line all it’s got to try and make up some time. 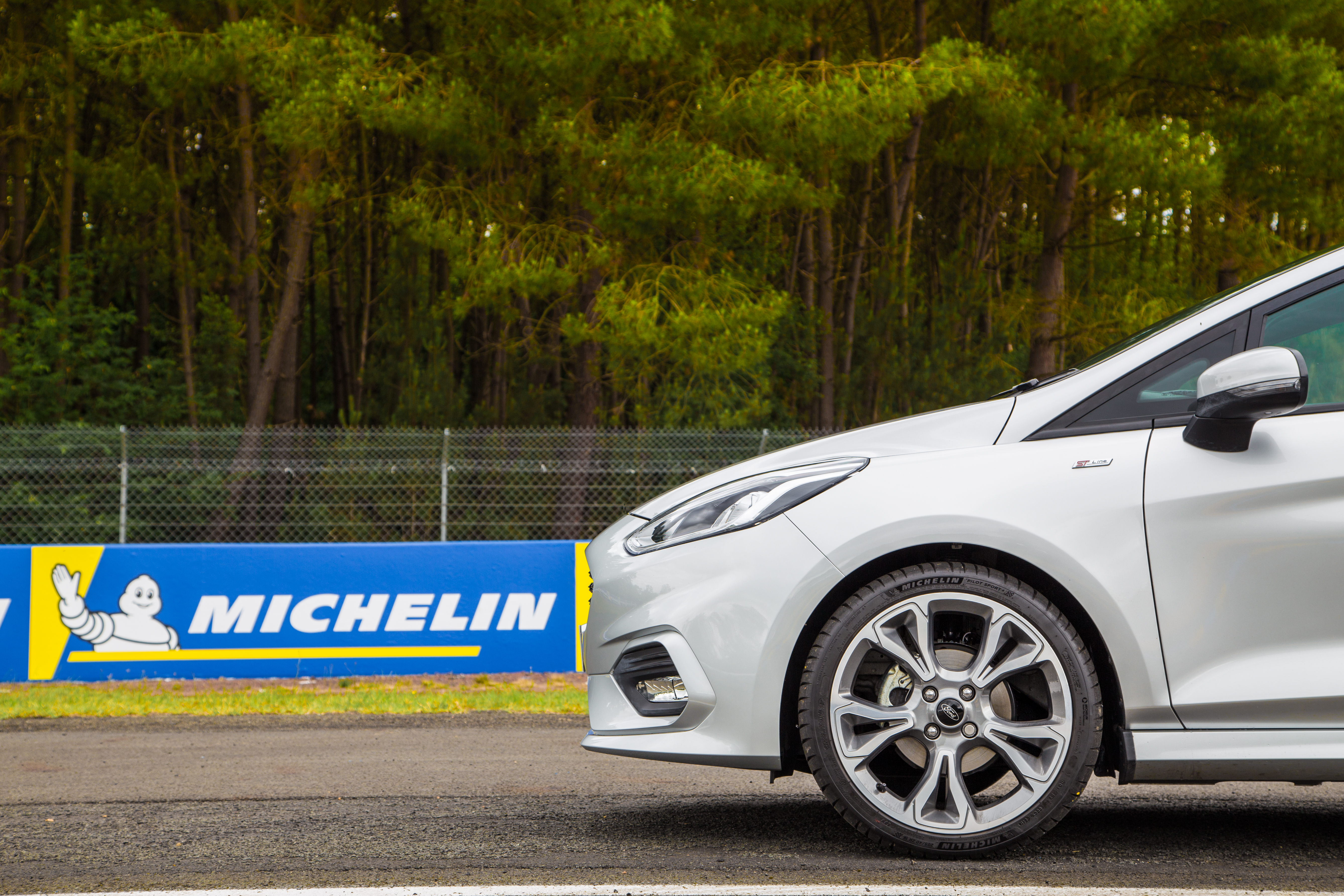 Thankfully, the Fiesta doesn’t disappoint. It might be the plushest generation to date, but on roads like this it’s still an absolute hoot. The quick, accurate steering and nimble chassis encourage you to chuck the car into corners at surprising speed, while the 1.0-litre EcoBoost thrives on being taken (nearly) all the way to the top of the rev range.

It doesn’t even seem to matter that our car isn’t the most powerful 1.0 Ford offers – 123bhp is still enough to have fun in a car of this size, and if anything, having less power eggs you on to keep up momentum by hitting corners just that little bit quicker.

It’s not long before the city of Le Mans is finally in sight, resplendent in banners and signs for the race that’s due to start in just a few hours’ time. The Fiesta’s journey might be over, but for its bigger brothers a mile down the road – the Chip Ganassi Racing team’s quartet of Ford GTs – it’s only just beginning.

With that, I tuck the ST-Line up for a well-deserved rest in the hotel car park. Over the last few hundred miles it’s proved itself as a surprisingly capable road trip steed – and frankly, I can’t think of a better small car for the job.