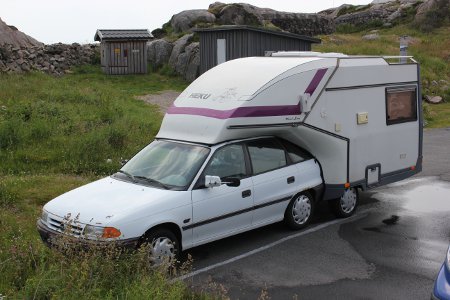 With summer just around the corner, our roads will slowly but surely begin filling up with caravans and campers.

As if they weren’t bad enough, you’ll also spot the odd, god-awful, DIY camper conversion. Unlike this one which is just all worlds of genius.

Not only one of the world’s dreariest cars but also finished in a hideously dreary shade of green.

I feel the VW #campervan could be getting replaced with this rather fetching camper car(?) conversion! pic.twitter.com/yBzY87pfiq

We’d advise the owner of this to not even attempt taking it on their summer holidays – it won’t make it.

#3 A Japanese rip-off of the VW camper

We’re not massive fans of replicas here at SuperUnleaded and this is not an exception to the rule.

Here we have something spectacularly dreadful: a Jeep with a tent on the roof.

MarketWatch: RT SilviaAscarelli: I'm struggling with this idea of a tent on the roof of a car: http://t.co/84Z6r6RcbQ pic.twitter.com/Dz0sIlFt2N

#6 A Pontiac with a tent on it

Continuing the cars-with-tents-stuck-on-them trend, here’s another. Arguably worse than the Jeep, it’s a Pontiac Aztec with a tent stuck on the back.

#7 And this is just beyond…

We found this on MotorhomePlanet.co.uk in an article titled ‘Unusual Motorhomes’ and we totally understand why. It looks like some sort of hybrid car/camper/caravan gone wrong. Almost like an automotive take on the Human Centipede. But still a better hybrid than the Prius, right?