The great-grandson of renowned explorer Sir Ernest Shackleton has become the first person to drive across Antarctica.

Shackleton led three British expeditions to the Antarctic, culminating in the Imperial Trans-Antarctic expedition of between 1914 and 1916, but sadly never actually made it to the South Pole.

However, in an impressive feat to commemorate his achievements, his great-grandson Patrick Bergel has completed the trip a century later and with a modern twist – using an SUV. The details have only just been made public, but Bergel took a lightly modified Hyundai Santa Fe on a staggering 3,604-mile journey across icy terrain in conditions that even a penguin would describe as ‘a bit parky’ – with temperatures falling to minus 28 degrees Celsius.

Well, when they say ‘lightly’ modified, they actually mean an overhaul of many parts. The original sub-frames had to be replaced with bigger ones so that the enormous wheels and very fat tyres would actually fit within the body of the car.

The wheels themselves were also modified to accommodate some gearing and extra suspension to help the car cope with being chucked around and pushed hard into solid ice.

A smattering of other modifications included increasing the fuel tank’s capacity and converting the car to run on jet fuel, which has to have a freezing point of at least minus 40 degrees Celsius.

Over 30 days of arduous driving in December 2016, this Hyundai soldiered on and battled its way through extreme weather on floating ice caps that had never had any vehicles whatsoever drive over them before, meaning that you could plunge into the freezing waters below at any minute and perish very quickly. What a chilling thought… 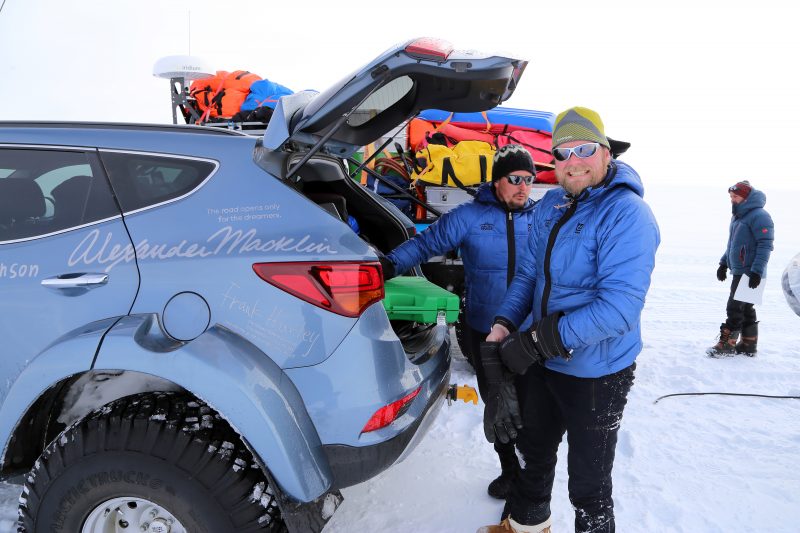 Locations were carefully plotted out beforehand to avoid as much danger as possible, but there were still huge obstacles and hair-raising moments to be faced.

Bergel, 46, said of his fantastic achievement: ‘The journey was incredible and the car was a pleasure to drive. Sometimes it felt less like driving and more like sailing across the snow. It was a proper expedition with a challenge to accomplish that nobody else had done before.

‘It was about endurance not speed – we only averaged 17mph and success was about how we and the car handled it.

‘I’m very reluctant to make direct comparisons between what my great-grandfather did and what we’ve done recently. But it is quite something to have been the first to do this in a wheeled vehicle.’

We salute him, however, on an amazing achievement, especially when we struggle to even get out of our own road when there’s a slight amount of ice on the ground.

So next winter when four centimetres of snow falls on the ground and you think that going to work isn’t an option, remember that a Hyundai has traversed the Antarctic, so you’ve got no excuse.