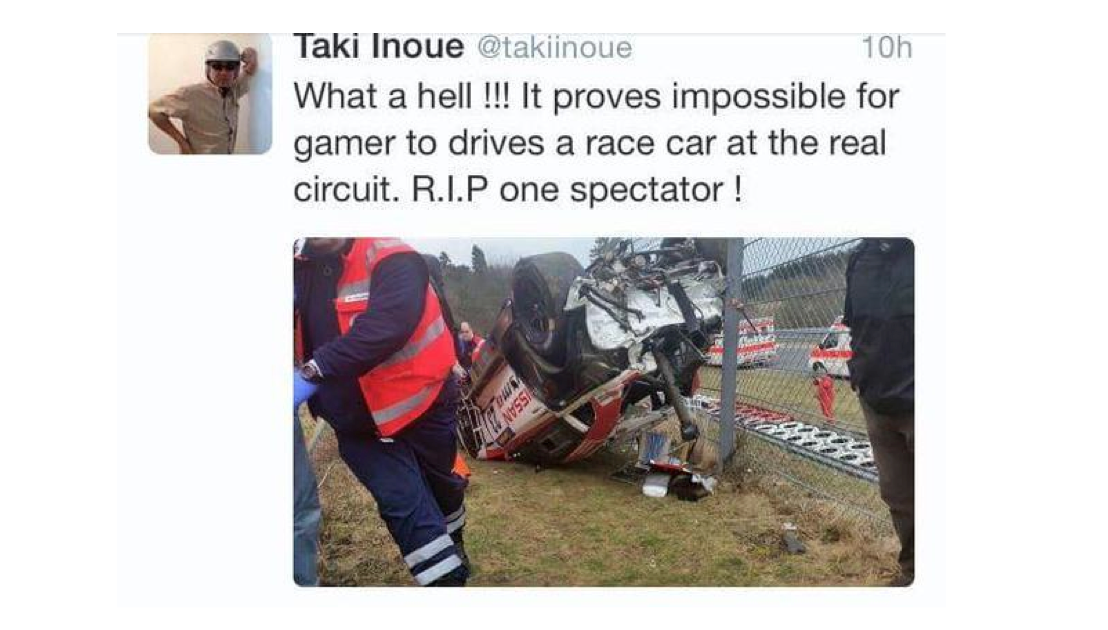 Former F1 driver Taki Inoue has been lambasted on Twitter for a harsh statement he made about a horror crash at the Nurburgring.

A spectator was killed at the weekend when GT3 driver Jann Mardenborough’s car took flight and crashed through a barrier.

Mardenborough was negotiating the Fluplatz section of the track when the incident happened. He’s now been released from hospital along with two injured spectators.

However, Inoue was quick to pass judgement on the GT Academy driver who entered the sport after his virtual racing talent on the Gran Turismo PlayStation game won him a real racing driver’s job.

@JensonButton can't believe @takiinoue could be so disgustingly crass.... pic.twitter.com/uWlHUV1MBB

The former Formula 1 driver posted this tweet before receiving a barrage of complaints and swiftly removing it. He then issued this (frankly quite weird) apology:

I apologize to Jann Mardenborough for my last insensible tweet and the inefficient Far East Japanese car giving him such a hard time.

If you don’t recognise the name Inoue this video might jog your memory. He’s best known for this F1 gaffe in 1995 when he was knocked over by the medical car.

Until a full investigation is carried out GT3 cars, and those of a similar spec to Mardenborough’s, have been banned from the Nordschleife circuit.

Everyone at Nissan would like to again extend their deepest sympathies to the family of the deceased and to the spectators who were hurt.

Nissan would also like to thank everyone for the support they have shown for the fans involved, the team and for Jann Mardenborough.