He might not be welcome back in certain parts of Yorkshire, but Jeremy Clarkson’s taking his new show to God’s Own Country anyway.

As announced on Thursday at the Paris Motor Show, the next big filming location for the multi-million-pound grumpy old men show (that occasionally features cars) after Johannesburg and Los Angeles is… Whitby!

Amazon members were invited to apply for tickets by filling out an application form that included questions on why they should be chosen for tickets and who their favourite presenter is of the three.

With the form only valid until midnight on Friday, applications were received from all over the world – and Amazon reporting that nationals from more than 100 countries had put their details into the site.

The chosen fans will be contacted in the coming days ahead of The Grand Tour’s filming on the North Yorkshire coast on October 13 and 14, with this message (as sent to us by one applicant) waiting in their inboxes: 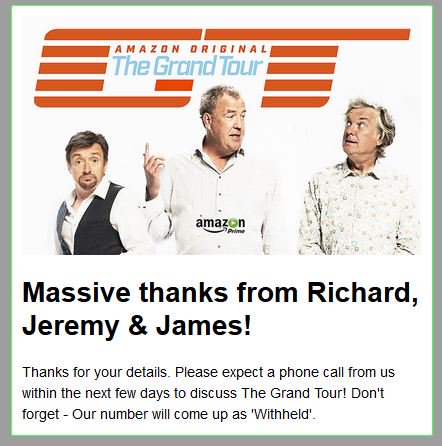 Jay Marine, vice-president of Amazon Video EU, said: ‘We are thrilled with the huge demand for tickets to the first UK recording of The Grand Tour and it is amazing that Jeremy, James and Richard have captured the attention of fans in more than 100 countries.’