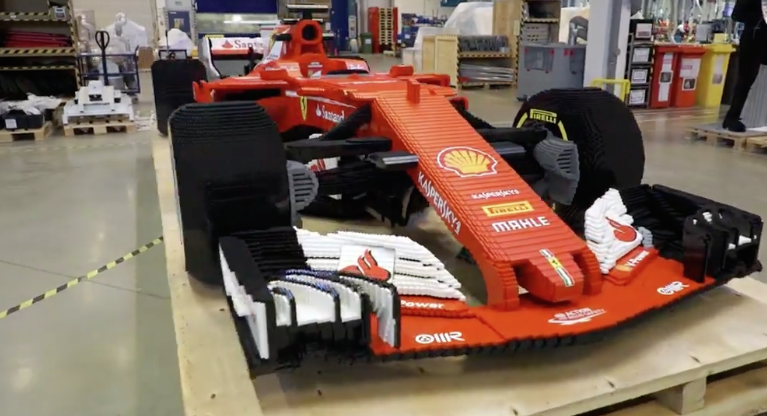 Hand someone with imagination a big bag of Lego and the results are often pretty spectacular.

Hand Lego’s own employees a REALLY big bag of red Lego bricks and this happens:

Looking for the One? We got the formula! 349,911 bricks, 750 hours of built, this life size version of the LEGO Speeds Champions Scuderia Ferrari SF70H will have your heart racing! <3 ?<3 #LEGOSpeedChampions #ForzaFerrari #CityRace #FerrariStore http://lego.build/ScuderiaFerrari

That’s a Ferrari SF70H – the Italian manufacturer’s 2017 Formula One car – reimagined in a symphony of Danish building bricks.

It took a mighty 359,911 bricks and so-called ‘special elements’ to produce the highly accurate model, as well as 750 hours of building time.

One of the more astonishing facts is the weight of this Lego Ferrari compared with its 200mph, carbon-fibre counterpart.

The bricks weighed in at 567kg, which is an impressive figure in its own right. However, if you consider the fact that Formula One’s minimum weight for cars (including the driver) is 702kg, the sheer magnitude of this project really makes itself known. Excluding the driver, the Lego version is less than 100 kilos lighter than the real thing.